Volkswagen starts to export T-Cross SUV, sold as Taigun in India, to Mexico

Volkswagen T-Cross or Taigun SUV is one of the first vehicles from Skoda Auto Volkswagen India built on the MQB-A0-IN platform.
By : HT Auto Desk
| Updated on: 11 Feb 2022, 12:19 PM 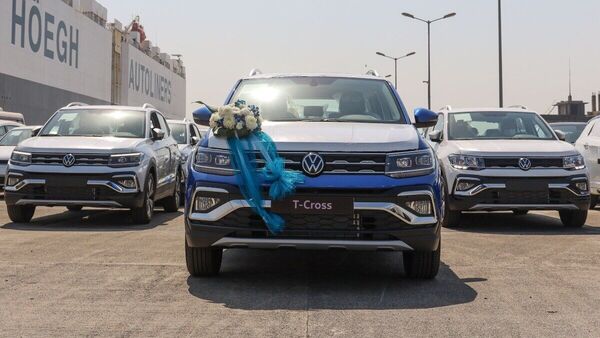 Volkswagen T-Cross or Taigun SUV is one of the first vehicles from Skoda Auto Volkswagen India built on the MQB-A0-IN platform.

Skoda Auto Volkswagen India has started to export Volkswagen T-Cross SUVs, made in India, to other countries. The SUV, which is being offered to Indian customers as Taigun, will now be sold in South American countries like Mexico.

On Thursday, Volkswagen shipped the first batch of 1,232 Volkswagen T-Cross SUVs to Mexico from the port of Mumbai. Mexico is the largest export market for the group.

Volkswagen had launched Taigun, the India version of the T-Cross, in September last year. The compact SUV rivals the likes of Hyundai Creta, Kia Seltos, Skoda Kushaq among others in the Indian markets.

The T-Cross, or Taigun SUV, is one of the first SUVs from the German carmaker built on the MQB-A0-IN platform to be exported from India. The T-Cross SUVs manufactured at the carmaker's facilities in India are similar to the Taigun SUVs sold in India.

Christian Cahn von Seelen, Chairman at Skoda Auto Volkswagen India, said, "The export of the Volkswagen T-Cross is a momentous event in the Group’s endeavour to engineer cars in India to be driven by the world! Developing India as an export hub for the VW Group globally, is an integral part of our India strategy."

"The Volkswagen T-Cross built for the world on the MQB A0-IN platform exemplifies the excellence we pursue in all aspects of production, from technology and quality to design and performance. With this export milestone, we further strengthen our commitment to offering next generation vehicles to and from India," Seelen added.

The T-Cross is not the first made-in-India vehicle from Volkswagen to be exported in other countries. The company had started its export programme in 2011 with the Vento sedan for the South African market. Since then, Skoda Auto Volkswagen India's export market has grown. The carmaker's ‘Made in India’ vehicles are currently sold across 61 countries in South America, Central America, Africa, the Indian Subcontinent, Southeast Asia, GCC countries, and the Caribbean region.