Twizy is a two-seater electric vehicle from Renault.The vehicle is powered by 6.1 kilowatt-hour battery and can go upto 100 km on single charge.Renault is not going to launch the vehicle in India but showcased it at Auto Expo 2020.
By : HT Auto Desk
| Updated on: 07 Feb 2020, 05:25 PM 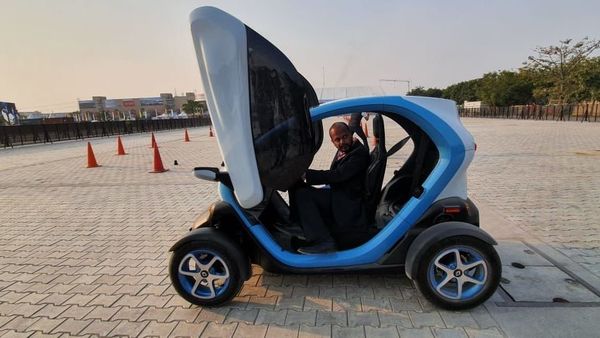 GREATER NOIDA : At the 15th edition of the Auto Expo, a host of cars have come to entice enthusiasts. But a micro electric vehicle called Twizy from French carmaker Renault stole the limelight and could be the flavour of the season this Valentine's Day season.

Twizy is a car you will fall in love with. It is electric, and even smaller than Tata Nano in size. The car fits two people and can go upto a speed of 100 kmph.

Twizy has a steeply raked windscreen, really narrow body and scissor doors. It also has a panoramic sunroof. The occupants sit in tandem style in minimalist interior design, and the car has single digital console.

It is worth mentioning here that the second seat is very narrow, and a persopn with average height can barely fit there. The front seat is adjustable, it still doesn't help much.

Twizy is a popular car in the European market, said the company. It was brought to India to give the customers a glimpse of the company's innovation in the e-vehicle space.

Once charged fully, the 6.1 kilowatt-hour battery gives Twizy a range of upto 100 km. It take around four hours to charge fully.

A cargo version of the car has also been launched by Renault, which replaces the second seat at the back with cargo shelf. The vehicle is used to transport small stuff at superstores and warehouses.

The car takes a while to pick up speed, but can go really fast. The company is giving free test drives of the car at the Auto Expo.

The company doesn't plan to launch Twizy in India. It is a low-speed short-range transport option in urban centres meant for last-mile connectivity.

In practical terms, the Twizy came across as a vehicle in which a person can go grocery shopping. The second available seat, when unoccupied, can accommodate a couple of gracery bags.