The SUV will come with some of the high-end equipments as standard, such as 360 degree camera, a nine-speaker JBL premium audio system with DAB, induction smartphone charger and collision avoidance radar.
By : HT Auto Desk
| Updated on: 03 Aug 2020, 11:38 AM 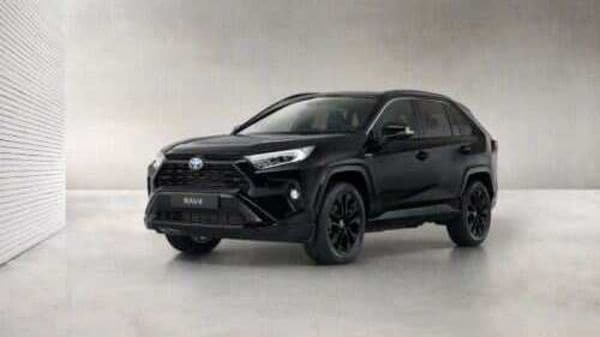 Toyota Motor has joined the latest cult of dark themed versions of existing models as it unveiled the Black Edition of its popular SUV the RAV4.

The new Black Edition finish of the RAV4 Hybrid has an all-monochrome design. The Black Attitude paintwork brings out the angles and facets of the bodywork, an effect accentuated by the black styling elements throughout the vehicle. The upper and lower grille, lower bumpers, exterior mirror caps, skid plates, rear trim and spoiler are all black. The 19-inch rims are also an elegant glossy black. Even smart parking cameras are painted black. Only the chrome Toyota logo on the front of the car is not.

The RAV4 Black edition will come with some of the high-end equipments as standard, such as 360 degree camera, a nine-speaker JBL premium audio system with DAB, induction smartphone charger and collision avoidance radar.

The Toyota Safety Sense pack as well as the possibility of connecting a smartphone via Apple CarPlay and Android Auto are also available as standard features.

(Also read: Why we need the fifth-gen Toyota RAV4 SUV, a Jeep Compass rival, in India)

The SUV is currently offered with either a petrol or petrol-hybrid engine, while the diesel options have been discontinued ever since it entered the latest generation. The new RAV4 Hybrid Black Edition is powered by an electric 2.5-liter four-cylinder engine that can produce 215 hp of power in the FWD variants and 219 hp of power in the all-wheel drive models. The engine is mated to a 8-speed CVT gearbox. The Toyota RAV4 Hybrid claims to hit zero to 100 kmph in 8.1 seconds.

Toyota RAV4 SUV has been around in the international market since 1994 and it is quite famous among the mid-size SUV buyers. The company has sold over 10 million units of the SUV ever since its introduction.

The Black Edition of Toyota RAV4 Hybrid are already available for booking. The delivery of the dark-themed RAV4 Hybrid is expected to begin from October this year.