The new 2022 Toyota Fortuner GR-S will be visually quite distinctive and will also be kitted up with several new features including a GR-tuned suspension system.
By : HT Auto Desk
| Updated on: 12 May 2022, 05:00 PM 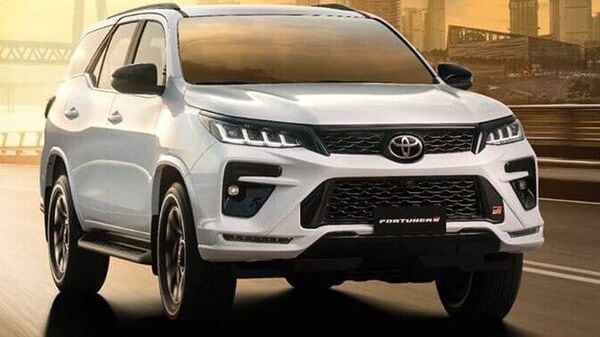 The Toyota Fortuner GR-S will be seen with several new cosmetic tweaks to make it stand apart.

Toyota is gearing up for extending its Fortuner SUV family in the Indian market with new GR-S trim. This new variant is likely to go on sale in the country very soon. The new 2022 Fortuner GR-S will be visually quite distinctive and will also be kitted up with several new features including a GR-tuned suspension system. For the record, ‘GR’ in the name stands for ‘Gazoo Racing’, Toyota’s performance arm.

On the outside, the Fortuner GR-S will be seen with several new cosmetic tweaks to make it stand apart. It will get a new tweaked front grille, front and rear bumpers, all-black alloy wheels, and GR badges on the grille, fenders and boot lid. The sportier theme will also be accompanied on the inside with an all-black interior with red stitching, GR badging on the steering wheel start-stop button, a new instrument cluster, and sportier-looking pedals.

The GR-S spec Fortuner will carry over some cabin features from the standard model such as the new wireless charger, a JBL sound system, a powered tailgate and an 8.0-inch infotainment system. Under the hood, it will get a 204hp, 2.8-litre diesel engine which will come mated to a 6-speed automatic transmission with four-wheel drive. However, there will be no petrol engine on offer.

In terms of placement, expect the Fortuner GR-S to be placed above the top-end Legender 4X4 variant. And will be likely seen only in the four-wheel drive layout. Some of its key rivals will include the likes of the MG Gloster and Mahindra Alturas – the only other SUVs with body-on-frame construction in this price bracket in India.