Tesla's previous events have been enough to send shares surging.The time lag from product announcement to availability after those past launches may have concerned Tesla investors.
By : Bloomberg
| Updated on: 10 Jun 2021, 19:12 PM 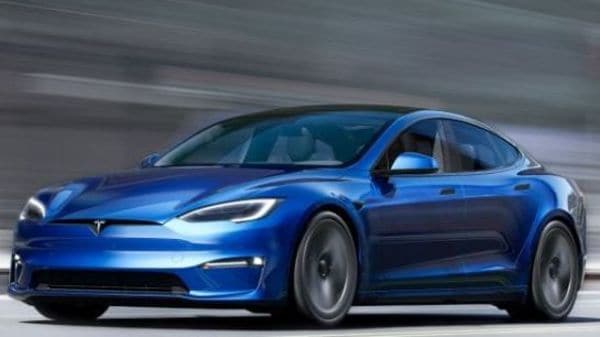 With a drop of 15%, Tesla’s stock is headed for its steepest first-half tumble since 2019 and has significantly lagged behind the S&P 500 Index, as well as some smaller peers.

Tesla Inc.’s glitzy marketing event Thursday to showcase its quickest car yet may not be the catalyst for shares such spectacles have been in the past.

The electric vehicle market leader, whose eightfold ascent last year helped boost the stock of many newcomers in the space, has seen the tables turn in 2021.

With a drop of 15%, Tesla’s stock is headed for its steepest first-half tumble since 2019 and has significantly lagged behind the S&P 500 Index, as well as some smaller peers.

And analysts aren’t exactly enthused about its prospects, with more than half of those who cover the stock rating it hold or a sell.

In the past, events like Thursday’s delivery kickoff of the newest version of the high-end Model S sedan, the Plaid, have been enough to send shares surging -- or tumbling -- in subsequent days. Tesla shares dropped 15% over two days after its “Battery Day" in September, while its China debut in January 2020 was followed by a 9% jump in a couple of sessions.

Yet even then the hype didn’t last as investors digested the challenges Tesla faced in carrying out its plans.

“The time lag from product announcement to availability" after those past launches may have concerned investors, said Cowen analyst Jeffrey Osborne.

Also, this time investors will be more interested in the strides Tesla is taking in its battery technology and power electronics than a flashy new product, after the near-last-minute cancellation of the higher-end Plaid+ version cast a shadow over the event.

Chief Executive Officer Elon Musk has said the reason for dropping Plaid+ was that the Plaid was already so good there was no need for another version. The Plaid will be able to go from 0 to 60 miles (97 kilometres) per hour in under 2 seconds, according to a tweet from Musk. But the change of plan has worried some who were expecting the now-cancelled car to potentially be fitted with a new battery that the company is developing.

“This ‘bait & switch’ has some Tesla fans worried, since they had deposits on the Model S Plaid+ and wanted the innovative 4680 battery cells that Tesla had been touting as the key to longer range and more power," Navellier & Associates strategist Louis Navellier wrote in a note earlier this week.

As a nearly constant stream of negative headlines pounded Tesla’s stock this year, positive developments have failed to turn around investor sentiment. The threat of competition from legacy carmakers, multiple crashes, some unfavorable China data and Musk’s unpredictable tweets weighed on shares, while the market quickly looked past the strong results and deliveries reported for the first quarter.