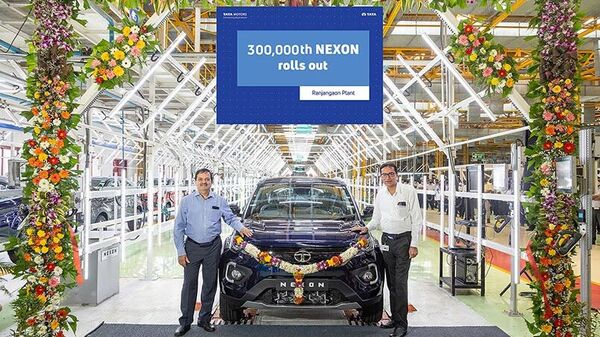 Tata Nexon is one of the bestselling SUVs from the brand.

Tata Motors on Monday has announced the introduction of new variants for the Nexon compact SUV. The homegrown automaker has introduced XZ+(P), XZA+(P) and XZ+(HS), XZA+(HS) variants of the SUV. The newly introduced variants come priced between ₹11,58,900 and ₹12,23,900 (ex-showroom, Delhi).

With bookings commencing today, the new Tata Nexon variants will be available across all Tata Motors authorized dealerships, said the automaker. Besides launching these new variants, Tata Motors has also rolled out Tata Nexon's 300,000th unit from its Ranjangaon plant.

Commenting on the three lakh unit milestone, Shailesh Chandra, Managing Director, Tata Motors Passenger Vehicles Ltd., and Tata Passenger Electric Mobility Ltd. said that being an integral part of the New Forever range, Nexon has successfully established its popularity in the compact SUV segment since its launch in 2017.

"Adding to the popularity of the ICE variant, the Nexon EV too has created a niche for itself and has gained immense recognition from its customers. The story of building a strong and safe SUV brand started with the Nexon – being the first Global NCAP 5 star rated car in India. Creating benchmarks in safety, Tata Nexon has also been widely appreciated for its striking design, superior ride and handling characteristics, spirited performance, and comfort," he further added.

Chandra also said that the success of Nexon has been pivotal in establishing the company's leadership in the SUV segment.

New variants of Tata Nexon comes carrying the same design as the current model. There are no changes in terms of design. However, the new variants such as Nexon XZ+ (P) and XZA+ (P) come equipped with additional premium features such as Benecke Kaliko leatherette, ventilated front seats, air purifier and auto-dimming IRVM.

The new XZ+ (HS) and XZA+ (HS) variants on the other hand come with an air purifier. These additional features will also be available in the respective #Dark editions of these new Nexon variants.