Tata Motors has recently confirmed that it will drive in the new Tigor EV for the Indian market. Tigor EV is likely to offer a range of around 250 kms on a single charge.
By : HT Auto Desk
| Updated on: 16 Aug 2021, 11:55 AM 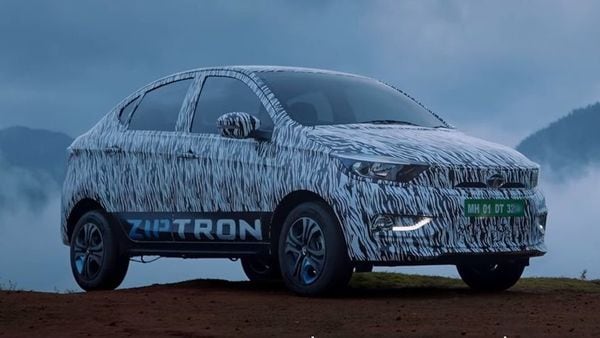 Tata Motors is all set to take the covers off its new electric vehicle, the Tigor EV, early next week. The Indian car manufacturer has confirmed that the new Tigor EV will make its official debut five days from today, on August 18.

Tata Motors currently offers Tigor in electric avatar for the Indian markets. However, the new Tigor EV promises to be even more powerful with the Ziptron technology.

Tata Motors has recently confirmed that it will drive in the new Tigor EV for the Indian market. In a teaser video on Wednesday, the carmaker shared a glimpse of the upcoming Tigor EV in camouflage. The video, posted on the carmaker's social platforms, features Formula One driver Narayan Karthikeyan.

The Tata Tigor EV will come with a high-voltage 300+ volt permanent magnet synchronous electric motor. Tata says this much more powerful than the 72V AC induction-type motor available on the current Tigor EV. Tata Tigor EV is likely to offer a range of around 250 kms on a single charge.

The teaser video indicates that Ziptron technology-enabled Tigor EV will offer much better performance. The Ziptron technology first made its debut in a Tata Motors electric car with the Nexon EV. The electric version of the Tata Nexon has been the most successful electric passenger vehicle in the Indian market so far.

As far as price is concerned, the Tata Tigor EV is expected to be more affordable than the Nexon EV.

The Tigor in its electric version was first introduced in India back in 2019. It was used by government authorities and fleet operators. But its limited range and performance issues did not exude much confidence in the EV among buyers.