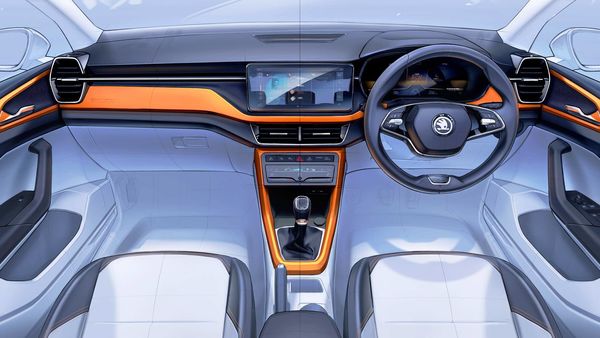 Skoda Kushaq SUV is all set to be launched on March 18. Ahead of the debut, The carmaker has revealed more details about the SUV, after it showcased some sketches about its exterior design last month.

In new details shared by Skoda, interiors of the new Kushaq SUV has been revealed through sketches. This is the first official glimpse inside the Kushaq SUV. It gets a spacious interior featuring a large, free-standing 10-inch infotainment display as one of the key highlights.

Th digital instrument cluster looks no less in size, according to the sketch. The centre console appears simplistic in nature, complete with buttons for climate control, USB charging points, cup holders among others. Skoda Kushaq will also have a driver’s armrest.

The interior design sketch also shows the character lines running beneath it, echoing the symmetrical contours of the Skoda grille. The dimensions of the Kushaq correspond to those of a mid-size vehicle.

Earlier, Skoda had released details about the exterior design of the Kushaq SUV. The sketches hint at a very sharp, bold and intimidating-looking car from the outside. The Kushaq is likely to sport sharply cut, two-part front headlights that flank the wide Skoda grille for a bold look. Skoda said the underride protection under the front bumper 'emphasises the athletic look of the SUV.'

Kushaq will come based on the MQB-A0-IN version of the Volkswagen Group's Modular Transverse Toolkit. It draws heavily on the Skoda Vision IN concept car which was officially displayed at the Auto Expo 2020.

The rear of the Kushaq SUV has a long roof spoiler and a rugged diffuser integrated over the bumper. It will also have Skoda's trademark crystalline structure in the tail lights along with Skoda lettering in bold at the tailgate.

"The Kushaq marks the start of a model offensive consisting of four new Skoda and Volkswagen mid-size models," Thomas Schafer, CEO, Skoda Auto, had previously said. The company says that the upcoming Kushaq already complies with the latest emission requirements in India.

When launched, Skoda Kushaq SUV will take on the likes of Hyundai Creta and Kia Seltos SUVs in India.