Skoda Kodiaq SUV sold out for 2022 weeks after its launch

Skoda announced that all units of its Kodiaq facelift SUV have been sold out for the rest of the year. The carmaker has not announced when the next slot of bookings will open.
By : HT Auto Desk
| Updated on: 04 Feb 2022, 10:19 AM 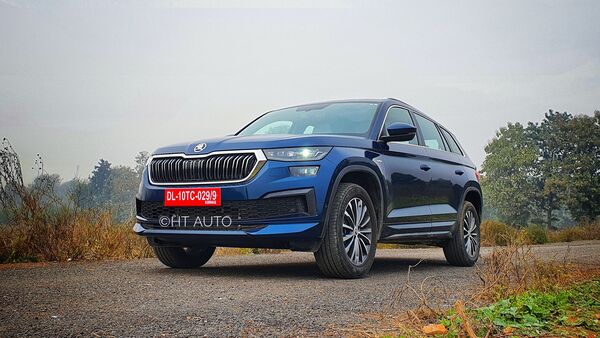 2022 Skoda Kodiaq SUV has been sold out for the rest of the year within 20 days of its launch.

Skoda Auto India has announced that the 2022 Kodiaq facelift SUV has been sold out within the first 20 days of its launch. The carmaker has said that all units of Kodiaq SUV, which Skoda intended to sell this year, have been bought. However, the carmaker has not revealed the exact number of units of Kodiaq it has sold since its launch on January 10.

Earlier, Skoda had announced a price hike on the SUV. Skoda had launched the 2022 Kodiaq facelift SUV at a starting price of ₹34.99 lakh (ex-showroom). However, the prices will go up from April this year. The Czech carmaker has hiked prices of Kodiaq SUV by ₹one lakh on each of the three variants.

Not in 60 seconds, Gone in 20 Days! The same head-rush. #ŠKODAKODIAQ has won India over. That’s what I call starting the year on a high. pic.twitter.com/LCJAM7sEvB

The new Kodiaq SUV is offered with a 2.0-litre TSI petrol engine, paired to a 7-speed DSG automatic gearbox. The engine is capable of churning out maximum output of 190 PS and 320 Nm of peak torque. Skoda claims the new Kodiaq can accelerate to 100 kmph in just 7.8 seconds. It rivals the likes of Volkswagen Tiguan, Hyundai Tucson and Citroen C5 Aircross.

Skoda offers the new Kodiaq with a redesigned hexagonal grille with chrome surroundings, body-coloured bumper and crystalline LED headlights. At the rear, the SUV gets turn indicators with Skoda lettering. It also sits on a new set of dual-tone alloy wheels besides a functional roof rail in silver.

The cabin of the new Kodiaq gets dual-tone theme in black and beige colours. The dashboard features an 8-inch touchscreen infotainment system with inbuilt navigation and wireless connectivity, a 10.25-inch digital instrument cluster, three zones automatic climate control system besides a 12-speaker Canton sound system on the doors. Skoda also offers ventilated front seats with cooling and heating functionality, ambient lighting and an electrically operated panoramic sunroof are among the other updated features.