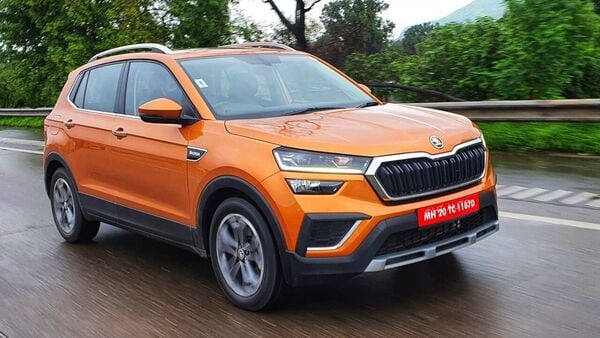 Skoda has launched a more affordable variant of Kushaq SUV which does not have a sunroof. (HT Auto/Sabyasachi Dasgupta)

Skoda Auto India has launched a new variant of its flagship Kushaq compact SUV in India. The carmaker announced that Skoda Kushaq Style 1.0 TSI MT, which is now being offered without a sunroof among other features, will be available at a price of ₹15.09 lakh (ex-showroom). The name of the new variants of Kushaq is Style NSR, with the abbreviation standing for No Sunroof.

Under the hood, the no sunroof variant of Kushaq SUV will come with the 1.0 litre TSI turbo petrol engine. The engine can generate 115 PS of power and 178 Nm of peak torque. The engine is mated to a 6-speed manual gearbox. Skoda has also given the choice of a 6-speed automatic gearbox with this engine in other variants. The bigger 1.5 litre turbo petrol engine, which produces 150 PS of power and 250 Nm of torque, has also been given in its top line model. It is mated to a 6-speed manual and 7-speed DCT (dual-clutch automatic) gearbox.

Apart from the sunroof, some of the other features that have been removed from this variants is the fully digital driver display, auto dimming IRVM, rain-sensing wipers and the 16-inch spare wheel which will be replaced with 15-inch wheel in style non-sunroof variant. It will continue to get ventilated front seats while a new 8-inch touchscreen will be included later.

Skoda Kushaq recently launched the Monte Carlo Edition, which pays homage to the carmaker's motorsport heritage and Rally Monte Carlo. at ₹15.99 lakh. It is offered with both 1.0 TSI petrol engine with six-speed manual gearbox and the range topping 1.5-litre TSI with seven-speed DSG unit.

The Skoda Kushaq SUV is available in India across 13 variants, with pricse starting from ₹11.29 lakh to ₹19.49 lakh (ex-showroom). Kushaq SUV competes in the compact SUV segment against the likes of Hyundai Creta, Kia Seltos, Volkswagen Taigun and MG Astor.