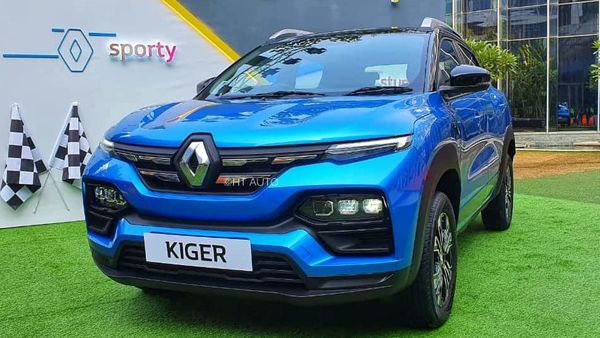 Kiger will be a global product manufactured in India and Renault is promising a whole list of feature highlights that could make it a compelling option. (Image: HT Auto/Sabysachi Dasgupta)

Renault India has launched the Kiger sub-compact SUV in the country at a starting price of ₹5.45 lakh (ex-showroom, pan-India). The company has also opened bookings for the SUV from today.

In the looks department, the SUV features the horizontally stacked headlamps mounted over the front bumper and sleek LED DRLs, lending it a high bonnet effect. It gets a high ground clearance of 205 mm and functional roof bars that tend to heighten its silhouette. The signature front grille seems to have a borrowed styling from the popular Kwid entry-level crosshatch.

Over the side, the funky looking alloys sit under muscular arches which add to its bold appeal. Renault has also used black plastic cladding on the doors and wheel arches for an added touch of aggressiveness. Over the rear, the inverted C-shaped LED tail lamps look sharp and modern.

Inside, it gets back-lit steering wheel controls that promise to make accessing the switches even more convenient. There is an eight-inch main infotainment screen and a seven-inch TFT cluster. The main screen is compatible with Bluetooth connectivity that can pair with up to five devices. There is also a USB socket for faster charging and a built-in MP4 video player. The TFT screen is reconfigurable for colours and widgets. Kiger also features a PM2.5 Clean Air Filter.

As for safety, the two front seats and the two rear side seats in the vehicle are fitted with three-point seatbelts, while the rear middle passenger seat features a two-point seatbelt. There are a total of four airbags - two for the driver and front-seat passenger along with the two side airbags. The front seats also get seat belt reminder alert for enhanced safety.

Kiger promises to heat up the already fiercely competitive sub-compact SUV segment in India. It will rival the likes of Nissan Magnite, Kia Sonet and other subcompact SUVs in India.