Home Auto Cars News Rechargeable Jeep Wrangler Set For 2021 Launch, Claims To Be 'out Of This World'

Rechargeable Jeep Wrangler set for 2021 launch, claims to be 'out of this world'

Rechargeable Jeep Wrangler will be a plug-in hybrid capable of going around 40 kilometres on electric power.Wrangler is famed for its off-road capabilities.
By : HT Auto Desk
| Updated on: 04 Dec 2020, 07:51 AM 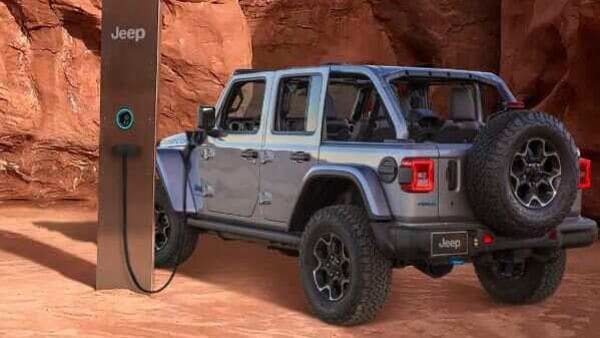 Just because a car is meant to dominate the outdoors doesn't mean it cannot have an electric heart which is environmentally conscious. This may be what Jeep Wrangler is now out to prove as the famed off-road SUV, known for tackling a wide variety of terrain challenges with arrogant levels of ease, will be launched in a plug-in rechargeable version coming in early 2021.

Jeep has confirmed that the rechargeable Wrangler 4xe is ready and raring for US roads and will be brought in early 2021. Promising it would be 'out of this world', the battery power inside the SUV also goes to show how the American car maker doesn't want to lag behind in the race towards going all electric.

The new rechargeable Jeep® Wrangler 4xe will be out of this world. (Coming Early 2021) pic.twitter.com/lilnnzXPEo

Jeep had already confirmed the plans of rolling out the rechargeable Wrangler earlier this year in what is one of many steps towards hybrid and all-electric products in its portfolio. That the company is ready with the first in early 2021, however, just goes to underline the sense of urgency to catch wind in the sails.

Rechargeable Wrangler will essentially be a hybrid SUV that would reportedly go for around 40 kilometres on sheer electric power. Post this, a 2-litre turbocharged engine will take over duties. Significantly, a generator powered by the engine can be chosen to recharge the battery but this would affect fuel economy. And that is where the plug-in option promises to add practicality and convenience.

It only makes sense for Wrangler to be first off the block from Jeep to get a battery. The SUV enjoys a solid reputation in several markets across the world and the car maker is emphasizing that it would continue to retain all its abilities - building on several, in fact.

Jeep officials have previously said that they do see a market for the rechargeable Wrangler even if they admit the move towards electric is also to meet regulatory requirements.