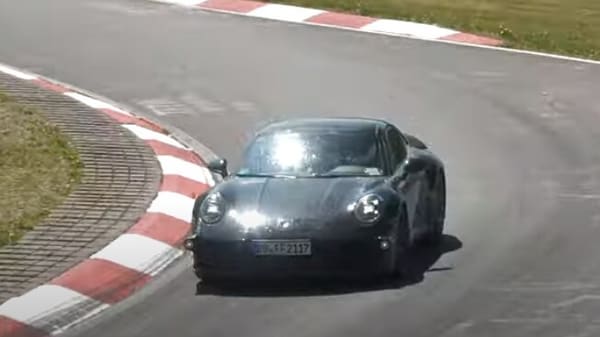 Porsche 911 Hybrid is expected to deliver the high performance expected from any Porsche. (Image: Youtube/Automotive Mike)

Porsche 911 Hybrid is inching forward to mass production and ahead of that, the greener iteration of the sports car has been spotted testing at the iconic Nürburgring track in Germany, where it has been seen pushing hard. This is expected to come as a mid-cycle update for the 992 generation model of the Porsche sportscar. Also, considering the testing going on at Nürburgring, the hybrid car is likely to deliver the high-level performance expected from a Porsche.

Interestingly, Porsche has been aiming to transform itself into a fully electrified car brand. The upcoming hybrid version of the Porsche 911 comes as part of that strategy. This is not the first time Porsche tried its hand with electrified technology. Previously, the automaker unveiled the 911 GT3 R Hybrid back in 2010, which was built to compete in the 2010 24 Hours of the Nürburgring. It used a KERs-style hybrid system in order to add performance to the internal combustion engine. Now, the first-production-ready 911 Hybrid is here, close to mass rollout.

Also, this comes in line with Porsche Italia CEO Pietro Innocenti's announcement of nearing debut of the 911 hybrid. He also said that it won't be a plug-in hybrid. Instead, it will use technology derived from Porsche's motorsport division and cars like the 919 Hybrid to improve performance, he explained. He also pointed out that the 911 Hybrid will focus on using electrification for better performance rather than efficiency. Clearly, Porsche aims to continue its signature performance characteristics with the upcoming 911 Hybrid.

The Porsche Taycan EV comes as a clear example of the automaker's ability to extract reliable performance from an electric drivetrain. Expect the hybrid powertrain of the Porsche 911 Hybrid too to deliver a similar performance.