Mercedes-Benz G-Class EV would come delivering a 500 hp combined power output from two electric motors.The electric G-Class SUV is expected to come with a total range of 500 km on a single charge.
By : HT Auto Desk
| Updated on: 19 Jul 2021, 12:41 PM 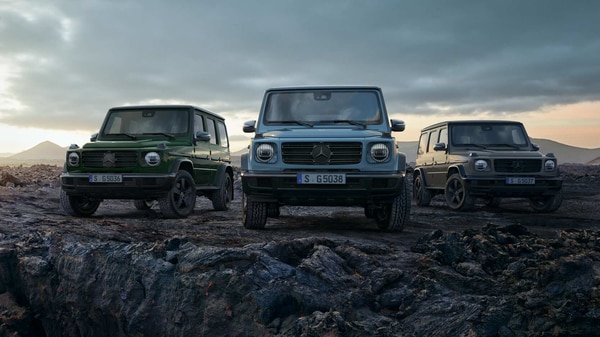 Mercedes-Benz G-Class is considered as one of the most capable luxury off-roaders in the world.

Mercedes-Benz is gearing up to unveil an interesting concept car at the IAA Munich in September this year. Dubbed as EQG, this would preview an all-electric G-Class SUV, claims a report by mbpassionblog. This comes in line with Daimler CEO Ola Källenius' announcement in November 2019. He again reconfirmed it in March last year.

Källenius said that the automaker would bring an electric off-roader is on the card and it would arrive in a few years. Now, as the German luxury car brand is working towards an all-electric future product lineup, ditching the ICE powered G-Wagen is an important part of the company's EV strategy.

Interestingly, the company terms the G-Class as stronger than time. Considering that, it is inevitable that the automaker will bring an electric variant of the iconic luxury off-roader.

The Mercedes EQG concept is expected to reveal the design outline, features and technologies that will be onboard the electric G-Class. The German publication claims that the production model of the G-Class EV is likely to arrive in 2022 or 2023.

The luxury electric SUV could get dual electric motors, each powering one axle and producing a combined power output of more than 500 hp. This will enable the SUV to get a four-wheel-drive system, something common in any G-Class. It would receive all the off-roading technologies available onboard the ICE G-Class. The SUV would get a large 108 kWh battery pack powering the EV for a 500 km range on a single charge.

The report also claims that EQG will come as an electric variant of G-Class, unline the EQS and upcoming EQE. Both the EQS flagship and the EQE are dedicatedly electric models.

Interestingly, Mercedes-Benz has recently filed trademark applications at European Union Intellectual Property Office for EQG 560 and EQG 580. In that case, expected the electric G-Class to come in two variants. Another interesting fact about the EQG nomenclature is that the German marquee originally registered the EQG badge back in 2016. Hence, the company is probably working on the model for nearly half a decade.