Maruti Suzuki has already released the first teaser for the upcoming Grand Vitara compact SUV. The teaser shows that the new Grand Vitara will come with LED taillights.
By : HT Auto Desk
| Updated on: 12 Jul 2022, 09:45 AM 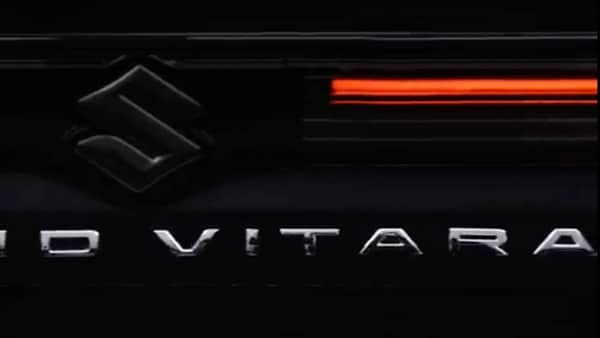 Maruti Suzuki will take the covers off the Grand Vitara compact SUV on July 20.

Maruti Suzuki Grand Vitara SUV is all set to make its debut next week. The carmaker will take the covers off the Grand Vitara on July 20. While the bookings for the SUV has already started at ₹11,000, more details about the Grand Vitara has emerged ahead of its official unveiling. Maruti Suzuki Grand Vitara, which is expected to phase out the carmaker's only existing compact SUV S-Cross from the markets, is an attempt to revive India's top car manufacturer's fortune in the segment. It is aimed to take on the might of the Korean rivals like Hyundai Creta and Kia Seltos, the two current leaders in the segment.

According to the official webpage of Maruti Suzuki, the Grand Vitara will be available in two broad variants through its premium Nexa dealerships. Besides the standard variant of Grand Vitara, Maruti Suzuki will also offer the new compact SUV with a second variant called Intelligent Electric Hybrid. The SUV, which is largely based on Toyota Motor's recently unveiled Urban Cruiser Hyryder, will possibly share the hybrid powertrain from its Japanese technical cousin.

Maruti Suzuki has revealed that the Grand Vitara SUVs up for bookings for now will only be offered with one colour choice - the Nexa Blue. However, Maruti Suzuki is expected to offer more exterior colour choices closer to the official debut next week.

Little is know about how the Maruti Suzuki Grand Vitara will look like. However, a teaser recently shared by the carmaker gave a sneak peek into the rear section of the SUV. It shows that the taillights will be LED streaks running across the boot door with prominent Suzuki logo and the Grand Vitara badging.

The Grand Vitara branding on a Maruti car makes a comeback after many years since the carmaker discontinued the earlier version which was sold in the early 2000s. The new Grand Vitara is likely be powered by the same 1.5-litre K15C series petrol engine offered with XL6 and the new Brezza. The engine will be combined with an electric motor for an expected power output of around 105 bhp. Transmission choices could include a five-speed manual and a six-speed torque converter gearbox like all new Maruti cars.

Besides the Creta and Seltos, the new Maruti Suzuki Grand Vitara will also take on rivals such as Toyota Urban Cruiser Hyryder, Skoda Kushaq, Volkswagen Taigun, MG Astor and other SUVs in this category. The launch and price of the SUV is expected to be announced closer to the festive season.