1/9
Maruti Suzuki has entered the mid-size SUV segment with the new Grand Vitara SUV while pre-bookings for the model have been opened for a token amount of ₹11,000.

2/9
In terms of exterior design, the model features a split headlamp design and projector headlamps with LED Daytime Running Lamps.

3/9
At the rear, there is a sleek LED tail lamps. Maruti Suzuki will offer the Grand Vitara in six monotone colors and three dual-tone colors.

5/9
On the inside, the Maruti Suzuki Grand Vitara gets a dual-tone theme of black and brown. The seats are finished in faux black leather with champagne gold accents in strong hybrid variant whereas the smart hybrid variant will get silver accents.

Maruti Suzuki has entered the mid-size SUV segment with the new Grand Vitara. This car will be going against other mid-size SUVs such as Kia Seltos, Hyundai Creta, MG Astor, Tata Harrier among others. The pre-bookings of the Maruti Suzuki Grand Vitara have commenced for ₹11,000 and it is expected to replace the S-Cross in the company's lineup. The prices of the Grand Vitara are expected to be revealed in August.

The Grand Vitara shares the majority of its components with the already unveiled Toyota Urban Cruiser Hyryder. Both the SUVs are based on Suzuki's Global C platform which is also being used on Maruti Suzuki Brezza and S-Cross. The engine, gearbox and other components will also be shared between the two SUVs. This helps in saving some research and development costs. 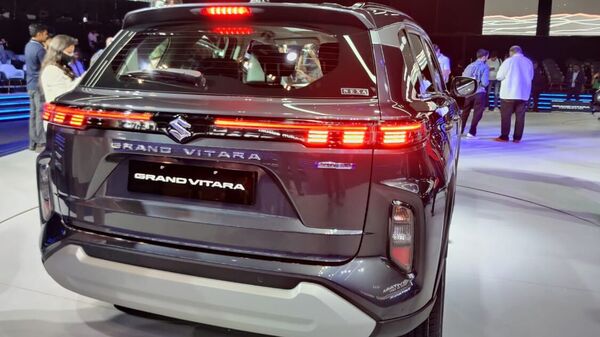 Up-front, there is a split headlamp design. There are projector headlamps with LED Daytime Running Lamps. At the rear, there is a sleek LED tail lamps. Maruti Suzuki will offer the Grand Vitara in 6 monotone colors and 3 dual-tone colors. 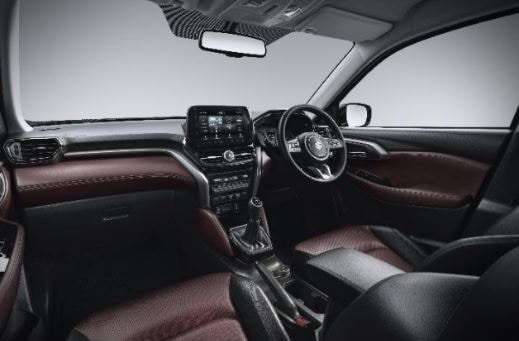 The Grand Vitara is Maruti Suzuki's first vehicle to be offered with a panoramic sunroof. It also comes with a heads-up display, wireless charger, a digital instrument cluster, 360-degree parking camera, and connected car technology. Other features on offer are ambient lighting, front ventilated seats, keyless entry, rear AC vents, a push button to start/stop the engine, and USB ports among others. There is also a 9-inch touchscreen infotainment system that supports Android Auto and Apple CarPlay.

The mild hybrid engine produces 100 PS and 135 Nm. It will be offered with a 5-speed manual gearbox or a 6-speed automatic transmission. It has a claimed fuel efficiency figure of 21.11 kmpl. The strong hybrid engine produces 115 PS of max power and will come mated to only an e-CVT automatic transmission. Maruti Suzuki claims a best-in-class fuel efficiency figure of 27.97 kmpl.