Home Auto Cars News Maruti Suzuki Brezza Cng Is Not About ‘if’ But ‘when’. Check Details Here

Maruti Suzuki Brezza CNG is not about ‘if’ but ‘when’. Check details here

Nine out of 15 models from Maruti Suzuki also get company-fitted CNG as an option. Company confirms to HT Auto that there is plan to introduce CNG to remaining models as well.
By : Shubhodeep Chakravarty
| Updated on: 08 Jul 2022, 14:16 PM 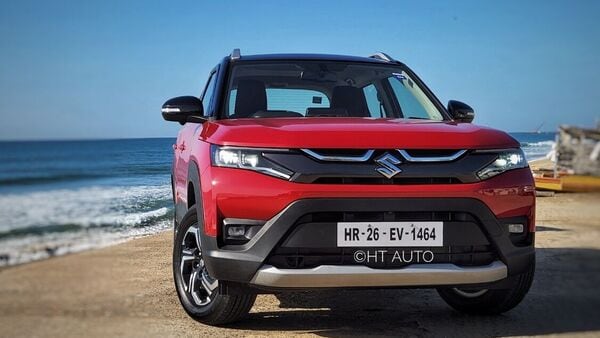 The latest Maruti Suzuki Brezza appears to have found favour among buyers, going by booking numbers. Will CNG option on the model further up its popularity?

Maruti Suzuki launched the latest edition of its Brezza sub-compact SUV amid much fanfare last month and the model has reportedly received a strong response with nearly 50,000 bookings in place. Banking on a fresh exterior design and loads of cabin features, the 2022 Brezza is aiming to cement is place at the top of the segment and another factor that could further propel its popularity is the possible introduction of CNG (Compressed Natural Gas) variant.

Maruti Suzuki has not officially revealed if a Brezza CNG is being considered but the company sure has the know-how to offer the alternate fuel option on the SUV, especially considering the strong response for models with CNG that it already offers. Speaking to HT Auto recently, Shashank Srivastava - Executive Director for Sales and Marketing at Maruti Suzuki India Limited - highlighted how the company attaches significance to CNG technology. “We have 15 vehicles in our portfolio, nine of which have CNG technology and for remaining six, we do have plans of CNG," he said. “We are ready for it but I can’t give you a model-wise timeline because in the last couple of years, we have had an overwhelming response for CNG, so much that the waiting period for CNG models is quite high."

Such is the scale of demand for Maruti's S-CNG vehicles that Srivastava reveals of the 305,000 pending bookings, as many as 130,000 are for those fitted with CNG kits. The latest Ertiga, launched earlier this year, is leading the pack with its CNG variant having a significantly high waiting period. “Our first priority is to try to reduce waiting period for CNG models and that’s what’s holding us back from bringing CNG variant in other models as of now. But we definitely have plans to bring CNG in remaining vehicles as well," Srivastava confirmed.

So while there may be a wait for those interested in a company-fitted CNG kit in the latest Brezza, Maruti Suzuki is determined to first cater to existing bookings. In recent years, Maruti has been following a petrol-only strategy while also backing CNG technology to find favour in times of high petrol and diesel prices. The latest Brezza continues with its 1.5-litre petrol motor which comes mated to the familiar five-speed manual transmission unit and an updated six-speed torque-convertor automatic gearbox with paddle shifters.