Land Rover Defender Convertible can be yours at ₹70.07 lakh 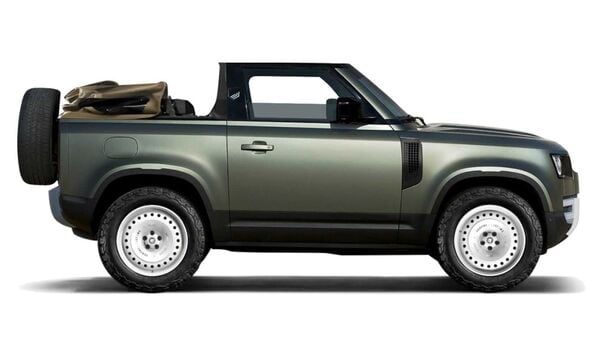 The Land Rover Defender convertible is built on the three-door Defender 90.

The coachbuilder claims that depending on its response, the company may build more Defender convertibles in future. Production of the five models is slated to commence later this year, claimed the company.

The idea of a soft-top convertible Land Rover Defender is nothing new. The idea has been there since 2019 only. An open-air escapade, with full-fledged off-roading capability, is an appealing proposition for the consumers. The drop-top version of the Land Rover Defender will compete with the rivals such as Jeep Wrangler and Ford Bronco.

The Land Rover Defender convertible is built on the three-door Defender 90. It is available in three different exterior colour options - Côte d’Azur, Solihull Sand, and Kokkini Paralia. The front profile of the SUV remains intact, while at the side profile, the only change is the chopped off roof. The exterior colour of the SUV and the colour of the soft-top cover come in different tones. It runs on 20-inch white Space Cowboy wheels.

Speaking about the cabin, it gets a copper accent, with the option to get classic themed seats and a steering wheel that invoke nostalgic appeal. The power source for the SUV is a 518 hp generating Defender V8 engine, which is the same as the original Defender built by Land Rover.