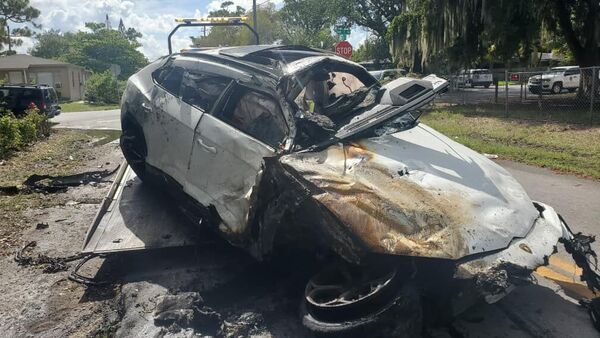 It may not look much like one but before the accident, this mangled heap was a Lamborghini Urus SUV. (Image courtesy: Fort Lauderdale Fire Rescue/Facebook)

Lamborghini Urus is touted as the fastest SUV on the planet but in the hands of an irresponsible person, can quickly go from being an impressively sporty vehicle to a heap of mangled scrap. And that's exactly what one Urus unit was after a horror crash which saw it reportedly hitting a home and catching fire in Miami's Fort Lauderdale.

According to local reports, this particular Lamborghini Urus was a rented unit which was allegedly being driven at high speeds. The driver of the SUV is also believed to have jumped a traffic signal before colliding against a Nissan Pathfinder. Such was the impact of the collision that the Urus was sent flying and it eventually crashed into a house in close proximity. 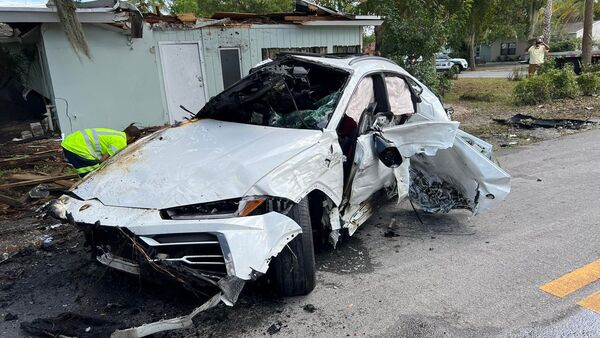 This particular Lamborghini Urus may be destined for the scrapyard. (Image courtesy: Fort Lauderdale Fire Rescue/Facebook)

Miami Herald reports that the person behind the wheel of the Urus was a 24-year-old who was pulled out of the crashed vehicle before it was engulfed in flames. But the person is said to have bolted from the site of the incident without even waiting for medical help. He eventually made it to a hospital and is learnt to have stated that he was confused after the crash and it was not his intention to flee from the scene of the incident. As for the flames, the Fort Lauderdale Fire Rescue team eventually brought matters under control.

As for the driver of the Nissan Pathfinder, not much details are known but police records apparently show that he had the right of way and therefore not at fault.

The entire incident once again underlines the need to be constantly vigilant behind the wheel of any vehicle. Even some of the most capable vehicles of today need not be pushed to their limits as doing this not only means breaking the law but can be a potential danger to the person or persons in the vehicle but those around it.