Kia Carens is the fourth product from the Korean carmaker for the Indian market. The three-row Carens will take on rivals like Hyundai Alcazar among others.
By : HT Auto Desk
| Updated on: 14 Feb 2022, 06:36 AM 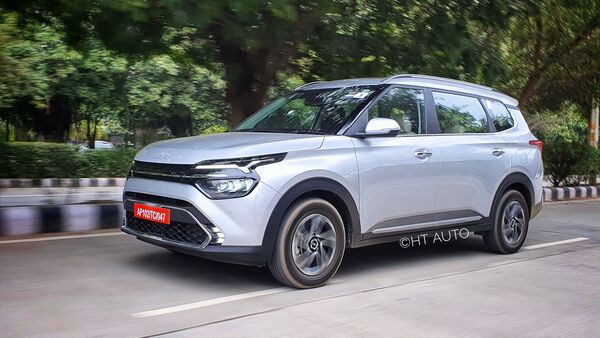 Kia Carens is a 6/7-seater premium MPV with SUVish features, will take on the like of Hyundai Alcazar, XUV700 and Maruti Ertiga among others. (Photo: Sabyasachi Dasgupta/HT Auto)

Korean carmaker Kia is all set to announce the price of its latest model for India. Carens, Kia's fourth product in the country after Seltos, Sonet and Carnival, will be officially launched on Tuesday after it was unveiled back in December last year.

Kia began production of the Carens, a three-row MPV or Recreational Vehicle (RV), at the Anantapur manufacturing facility in Andhra Pradesh earlier this year. The bookings started last month as the car started to reach dealerships since then.

Carens will be available in five variants, which include Premium, Prestige, Prestige Plus, Luxury, and Luxury Plus trims. The top-spec trim will be offered with features like a 10.25-inch main infotainment screen, wireless connectivity for Apple CarPlay and Android Auto, 64-colour ambient lighting, air purifier, digital driver display and a sunroof, among others.

For safety, the Carens MPV will use some industry-standard features such as a tyre pressure monitoring system, downhill brake control, six airbags, ABS, ESC, rear parking sensors, and disc brakes on all four wheels.

Kia is likely to price Carens somewhere between ₹14 lakh and ₹20 lakh (ex-showroom). The price bracket is likely to be similar with its technical cousin Hyundai Alcazar. When launched, Kia Carens will take on rivals such as Mahindra XUV700 and Tata Safari besides its Korean rival.