Jeep to bring in its first all-electric SUV in 2023 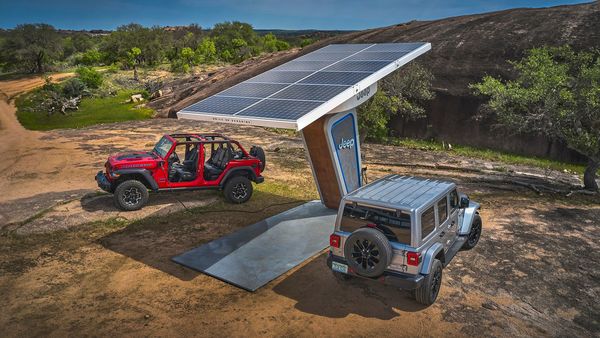 While the entire automotive industry is working to electrify the vehicles, major offroading vehicle manufacturer Jeep doesn't want to shy away from the trend. Just a few days ago, the US automaker showcased its future plans for the Jeep electric SUV. Now, the brand has revealed that it would bring the first all-electric Jeep in the first half of 2023.

(Also Read: Electric Wrangler that may drive under water? Jeep ready for wet and wild run)

The future Jeep electric SUVs would get autonomous off-roading capabilities, remote vehicle tracking, self-driving technology, etc among other features. It would also get a multi-power port, biometric facial recognition to unlock the vehicle, dynamic tire pressure for off-roading adventures, peer-to-peer charging, the ability to connect with a drone, etc.

Jeep's parent company Stellantis has confirmed this during the latest financial result announcement. According to Stellantis, it will launch 21 low-emission vehicles over the next two years.

The fourth-largest automaker in the world has also confirmed that it plans to invest around $35.5 billion in the electrification of its fleet of vehicles by 2025. Jeep would be one of the major brands to receive a chunk of this huge investment. This comes in line with Jeep's strategy to electrify 70% of its total global sales by 2025.

Jeep is yet to disclose, which SUV of the carmaker will be the first to receive an electric powertrain. However, the recently unveiled video showed a Wrangler-based EV concept. In that case, an all-electric Jeep Wrangler is a possibility.

Interestingly, Jeep Wrangler already comes available in a hybrid 4xe configuration n China and Europe. Among other electrified Jeep models, Compass and Renegade are available with plug-in hybrid options. Jeep Commander PHEV is sold in China. The automaker is working on a Grand Cherokee plug-in hybrid that could launch later in 2021.

Jeep is also working on a three-row Grand Cherokee, a new Wagoneer, and a Grand Wagoneer.