Hyundai had earlier teased the Seven Concept electric SUV which showcased the Parametric Pixel lighting at the front and a lounge-like interior.
By : HT Auto Desk
| Updated on: 17 Nov 2021, 10:14 AM 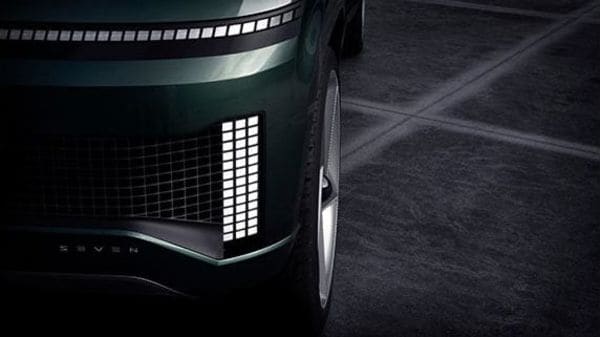 Hyundai Seven Concept electric SUV is all set to make its official debut at the Los Angeles Auto Show later tonight. Hyundai has announced that it will be the third in the Ioniq family, which will follow the Ioniq 6. Both will join the Ioniq 5, which was launched earlier.

Hyundai Seven Concept electric SUV, or the Ioniq 7 as it would be called when production starts, will be a large SUV and will be able to accommodate seven occupants. Just like its electric siblings, the Seven electric concept SUV will be developed on the new Hyundai-Kia E-GMP platform, a modular and flexible architecture designed specifically for purely electric vehicles.

The Seven Concept electric SUV will also wear Hyundai's future design philosophy. The Seven Concept electric SUV's light signature is distinguished by the parametric pixels, a feature seen in the Ioniq range of cars. The LED light bar extended across the hood, possibly all the way. Below that are the main headlight units with parametric pixel light-emitting diodes and a contrasting front panel.

The interiors evoke a premium and personalised lounge environment, capable of maximising spaces like in the Ioniq 5. Also, the materials used as upholstery are all sustainable and designed to offer the customer a refined and ecological mobility experience.

Hyundai has not yet revealed any details about the Seven Concept electric SUV. However, according to reports, Ioniq 7 will have a large capacity battery. It is said to be of up to 100 kWh, and will be equipped with an 800-volt system from SK Innovation.

Hyundai Seven Concept electric SUV is expected to return a range of around 500 kms on single charge. It is likely to come with similar powertrains as offered in Ioniq 5 or Kia EV6. The Ioniq 5 has a 225-hp power and 350 Nm torque output. On the other hand, the Korean carmaker's EV6 offers an impressive 576 hp of power. If Hyundai Seven Concept electric SUV, or the Ioniq 7, can come with such performance figures, it would place it as the most capable electric SUV, even above the Tesla Model Y Performance or the Ford Mustang Mach-E GT Performance.