Gordon Murray Automotive has unveiled its T.50 supercar in full for the first time, showing the finished exterior and interior design and confirming its ground-breaking technical specifications. The T.50 claims it has been engineered to be the purest, lightest, most driver-centric supercar ever.

The global premiere is the first time the clean lines of the exterior and the driver-focused interior have been seen. From his first ballpoint sketches, to every engineering and design detail, Murray has led the Gordon Murray Automotive team and briefed and overseen suppliers to drive the project forward at an unrelenting pace. Murray’s design for T.50 was the 50th in a prestigious line of race and road cars he’s penned over his illustrious 50-year career – both reasons combining to name the car T.50.

The most dominant characteristics of the T.50 exterior design are its purity and balance, free from the wings, skirts and vents that adorn most modern-day supercars. The clean surfaces are enabled by the most advanced and effective aerodynamics ever seen on a road car, resulting in deliberately simple, beautiful lines and a timeless appearance.

"Just 100 customers will share my vision, a car created to improve on the F1 formula in every conceivable way. With 30 years of technological and systems advancement, now, the time is right to design the greatest analogue driver’s car. I believe no other company could deliver what we will bring to market in 2022, producing this British supercar will be my proudest moment," said Murray.

The chassis and body of the T.50 are entirely constructed from high-grade carbon fibre. Creating inherent stiffness and torsional rigidity, the carbon fibre plays an important role in making T.50 the world’s lightest supercar.

At the heart of T.50 ethos is the ultimate, sensory-rich driving experience, which all starts with the central driving position. The ‘jet-fighter’ style seating position affords an unhindered view out of the cabin, offering the type of pure driving experience usually associated with a single-seater race car layout. The chassis and body of the T.50 are entirely constructed from high-grade carbon fibre.

The 3.9-litre T.50 engine delivers maximum power (663PS) at 11,500rpm, on its way to a 12,100rpm redline. The Cosworth GMA V12 not only promises screaming high-end power, it is also extremely tractable for everyday driving. The maximum torque figure of 467Nm is produced at 9,000rpm, while the pick-up is a record-breaking 28,400 revs per second.

The T.50 has the highest power density (166PS-per-litre) of any road-going V12. It is also the lightest ever made thanks to a combination of exceptional design and lightweight materials (aluminium, steel and titanium) resulting in a total engine weight of just 178kg.

Through the application of two automatic and four driver-selected aero modes, the T.50 is capable of increasing downforce by 50%; reducing drag by 12.5%; adding around 50PS to the car’s output in combination with ram-air induction; and cutting braking distance by 10m from 150mph. 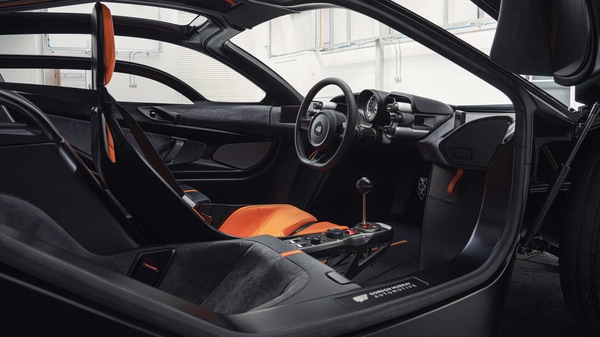 At the heart of T.50 ethos is the ultimate, sensory-rich driving experience, which all starts with the central driving position.

Commenting on the journey so far, Murray said: “For the past 18 months, the T.50 team has lived and breathed the ethos of the car, accomplishing everything we set out to achieve and more. I couldn’t be happier with the car and the team – they’re by far the best I’ve ever worked with."

In designing the T.50, Murray applied one of his core supercar philosophies, reversing the traditional focus on power-to-weight, to instead consider the vehicle’s ‘weight-to-power’ ratio. In the T.50, every 100PS has to propel just 150kg of car, whereas for the typical supercar (1,436kg with 693PS) the weight it has to shift is 40% higher, at 207kg. It is this weight-to-power calculation that drives the development of the T.50, with every component designed and engineered to achieve the lowest possible weight.