Foxconn said the future collaboration of the two sides will be decided after Byton completes its organizational restructuring.
By :
| Updated on: 07 Jul 2021, 07:07 PM 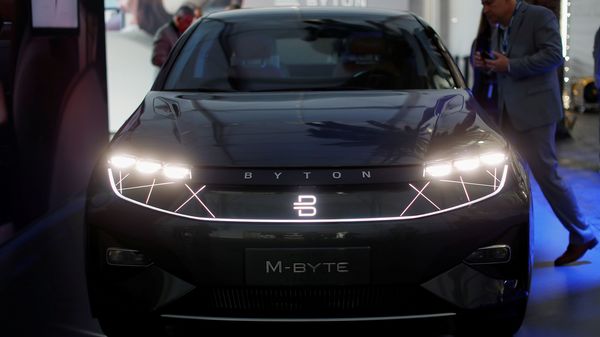 Joining with Foxconn was seen as a lifeline for Byton, which has struggled to produce its first vehicle, having unveiled its M-Byte concept car several years ago.

Foxconn Technology Group’s push into electric vehicles through its partnership with Byton Ltd. has hit a snag, with one of the Chinese carmaker’s biggest creditors taking management control of the company, according to people familiar with the matter.

China FAW Group Co. installed one of its officials, Zhang Ying, as chairman of Byton last week, said the people, who asked not to be identified because the information is private. Foxconn, which struck a strategic cooperation deal to make cars with Byton in January, is now withdrawing personnel, with some of the workers it dispatched to the automaker’s Nanjing plant being pulled out, one of the people said.

That has raised questions over whether Byton can meet its goal of starting mass production early next year, and the carmaker’s potential plans to list through a merger with a special-purpose acquisition company, or SPAC, according to the people. Byton was in talks with blank-check companies over a listing earlier this year, Reuters reported in February.

FAW is also unwilling to convert its debt into stock to pave the way for a share sale, according to some of the people.

Foxconn spokesman Jimmy Huang said the “future collaboration of the two sides will be decided after Byton completes its organizational restructuring."

A spokesperson for Byton didn’t specifically address the board changes, but said the company is “actively pushing forward" with the mass production of its first model. They added that “core stakeholder" FAW and “partner" Foxconn will collaborate in sending executives to Byton to support production and operations.

Joining with Foxconn was seen as a lifeline for Byton, which has struggled to produce its first vehicle, having unveiled its M-Byte concept car several years ago. Foxconn planned to supply Byton with its advanced manufacturing technology, management expertise and supply-chain resources. Foxconn cooling on the deal may again jeopardize Byton’s prospects in China’s increasingly competitive EV market, with rival startups Nio Inc. and Xpeng Inc. increasing sales and Tesla Inc. producing locally.

China is shaping up as the first real test of the ambitions of technology companies like Foxconn in EVs, with giants from Huawei Technologies Co. to Baidu Inc. plowing almost $19 billion into electric and self-driving vehicle ventures. Meantime, traditional carmakers such as FAW and Zhejiang Geely Holding Group Co. are trying to gain a foothold in the market, alongside global powerhouses like BMW AG and Volkswagen AG.

Adding to the uncertainty over Byton’s potential SPAC listing, China issued a sweeping warning to its biggest companies Wednesday, vowing to tighten oversight of data security and overseas listings just days after Didi Global Inc.’s contentious decision to go public in the U.S. Rules for overseas listings will be revised, China’s cabinet said, while publicly-traded firms will be held accountable for keeping their data secure.