Model 3 is the most affordable product from theTesla but no one customer has ever purchased 28 units of it in one-go.The accidental purchase was cancelled by Tesla after the customer reached out to it.
By : HT Auto Desk
| Updated on: 30 Jun 2020, 09:50 AM 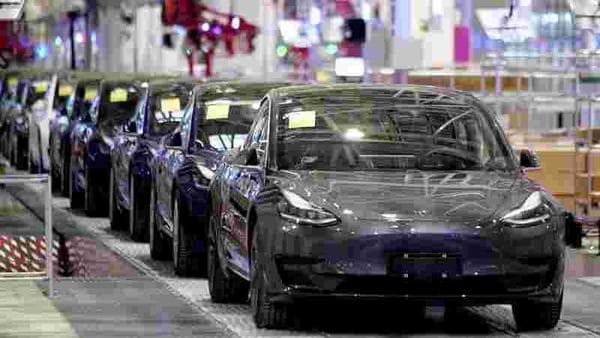 Tesla cars have earned a massive fan following around the world and are raved as much for being technologically advanced and being all-electric as for drawing eyeballs and being a status symbol of sorts. Little wonder then that those with enough financial resources often end up having one in their garage but even the richest of rich may not have ever purchased 28 units in one-go. That, however, is exactly what a German man did inadvertently when he tried to make a single-unit purchase online.

According to a post on Reddit which has now been widely reported in global news outlets, the man in question accidentally spent 1.4 million euros on 28 Tesla cars. The post was written by the man's son who explained how a technical glitch on the Tesla website caused the audaciously expensive error.

The post goes on to highlight that the man was looking to replace his old Ford Kuga with a Tesla Model 3. His decision was also backed by a slew of offers and incentives available in Germany for EV purchases. After filling in all details and adding the desired optionals, the customer clicked the 'Confirm' button but received no message. So he pressed the button repeatedly for some time, apparently 'purchasing' a new unit with every click. In all, the 28 clicks meant 28 purchases with the final order amount coming to the exorbitant amount.

It is reported that while Tesla does not offer refunds on products once purchased, the company decided to make an exception after the man in question contacted it. Additionally, 2,800 euros in deposits - 100 euros per car - were also refunded.

With online sales channels being strengthened by automakers in current times of Covid-19, technology has come to the aid of manufacturers as well as prospective customers. But even technology, as is clear from the one-off exception above, is not free from its limitations.