BYD is one of the largest EV makers in China, and also has a solid presence in the global markets, especially Europe.The e6 comes out as India's first battery-powered MPV.BYD's new e6 will target only the fleet operators in the country.
By : Prashant Singh
| Updated on: 18 Dec 2021, 06:00 PM 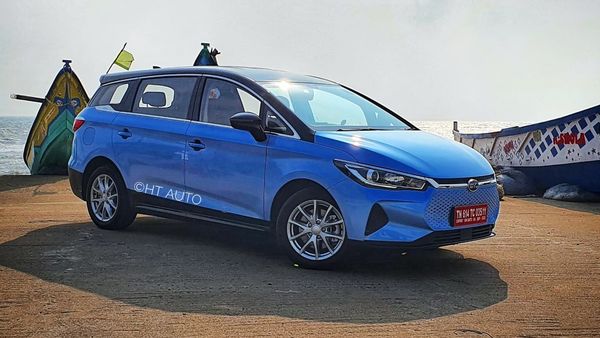 BYD is one of the largest EV makers in China, and also has a solid presence in the global markets, especially Europe.

The Indian EV market is burgeoning with electric vehicles lately. Only recently, BYD (Build Your Dreams) has made its presence felt in the Indian market with its premium electric MPV - e6. It comes out as India's first battery-powered MPV that marks the commencement of operations for the brand in the country.

BYD is one of the largest EV makers in China, and also has a solid presence in the global markets, especially Europe. The brand has expertise in making electric cars and buses. And as far as the Indian market goes, BYD's new e6 will target only the fleet operators in the country.

What's e6 all about?

Its e6 MPV comes in a large and premium package. At the front, it gets what the company likes to call a “Dragon-face" inspired styling. The snout of the electric MPV features a slim chrome bar that is flanked with new headlamps assembly stretching out towards the sides. There are projector lamps along with DRLs positioned on the lower side. The e6 doesn't get a traditional front main grille, but a perforated mesh structure to allow the passage of minimal air, which is neatly designed. 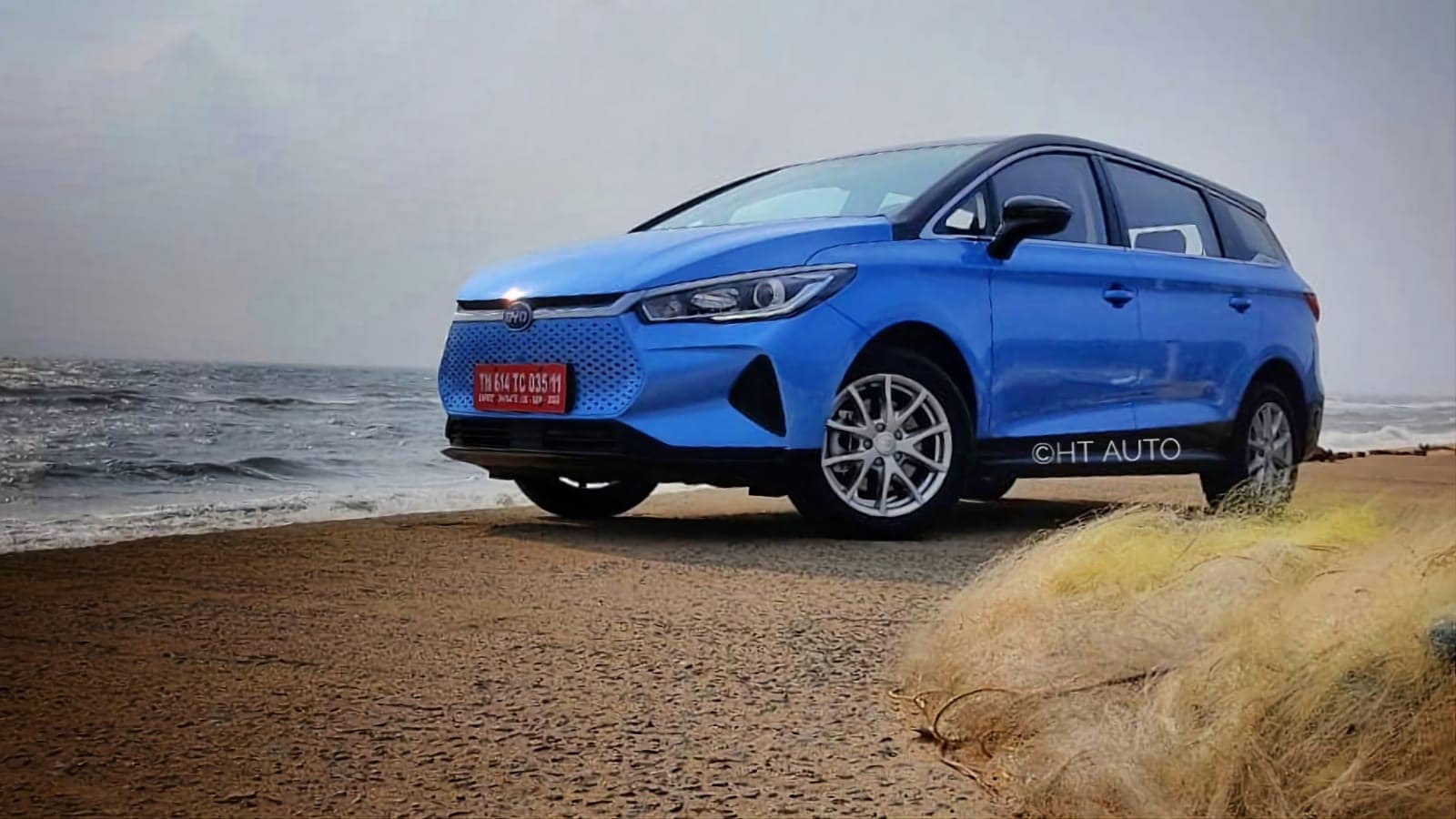 The e6 doesn't get a traditional front main grille, but a perforated mesh structure to allow the passage of minimal air, which is neatly designed. (HT Auto/Prashant Singh)

The car also makes generous use of blacked-out elements here and there. For starters, its rearview mirrors, as well as bumpers and pillars, all come dipped in black. Come to the rear and you'll find the design almost complementing the entire look. The taillights are connected with a slim chrome bar that adds a touch of premium-ness and the spoiler sitting above the tailgate again comes in black.

Open the manually operated tailgate and it unlocks the biggest in segment 580 litres of boot space that truly come in handy especially due to the flat lip that makes it fairly convenient to use.

Step on to the front seats, and you'll be greeted by a completely blacked-out cabin space. Its driver's console uses twin analog clocks and a mid-placed digital screen for all the information about the vehicle and trip status. The driver's screen is guarded by a multi-function steering wheel. 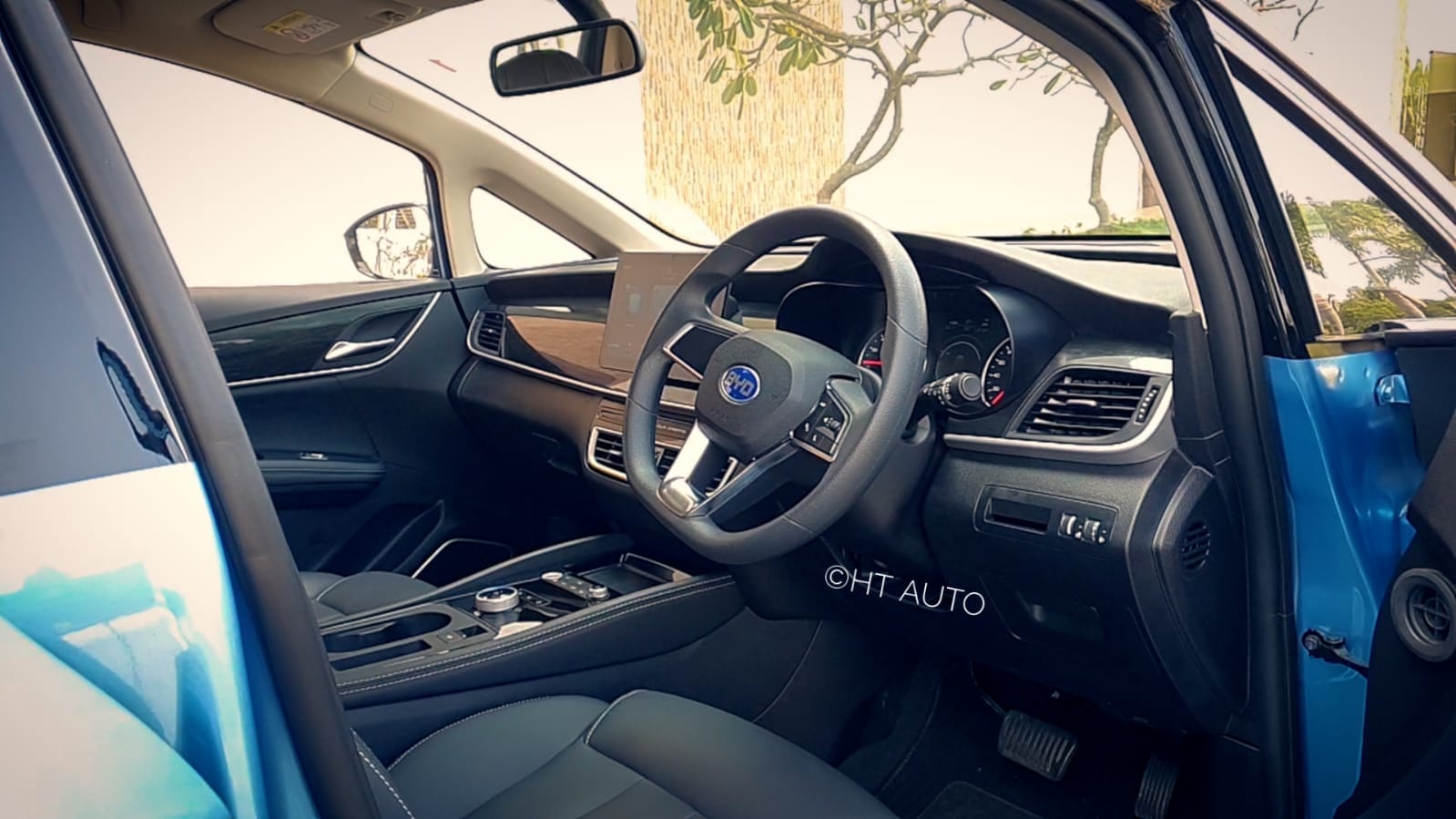 The driver's screen on the BYD e6 is guarded by a flat bottom multi-function steering wheel. (HT Auto/Sabyasachi Dasgupta)

The key highlight inside the cabin of the e6 is its rotatable touchscreen infotainment system. This basically changes orientation and converts to a tablet in seconds. It can also be paired to a smartphone via Bluetooth and WLAN, and also displays inbuilt navigation with maps. This screen also shows the battery and regen status which is pretty cool to look at.

The center console on the car also gets a rotary dial for drive mode which looks premium and gives it an up-class touch. But sadly, the car lacks some features such as wireless charging, electrically adjustable, or ventilated seats even after charging a high premium.

The second row is where the passengers will be spending most of the time in this MPV, the doors to which open wide and the ingress is easy. Thanks to the long wheelbase, the company has been able to carve out massive legroom for the second row, also the headroom is good enough even for people above 6 feet. 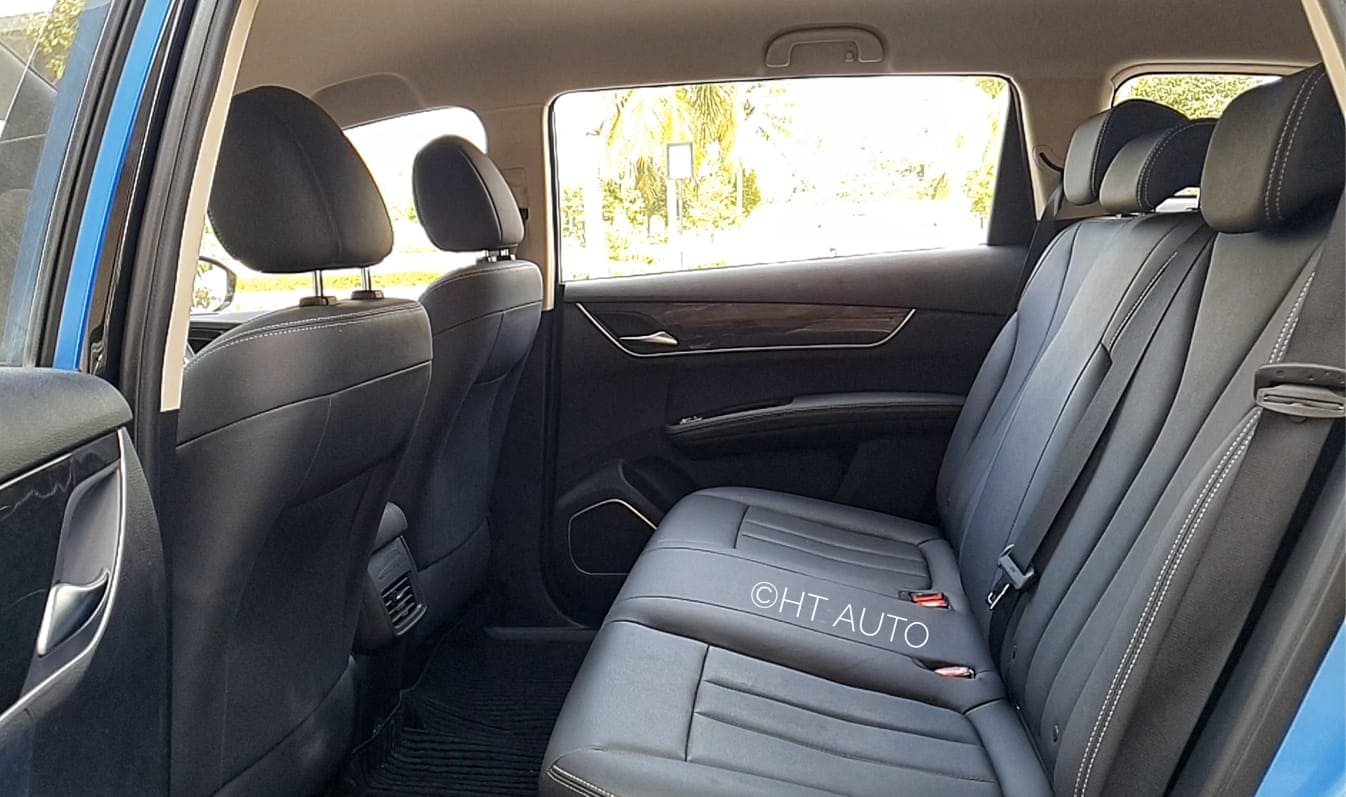 Thanks to the long wheelbase, BYD has been able to carve out massive legroom for the second row in e6. (HT Auto/Sabyasachi Dasgupta)

Seats on the e6 are comfortable enough to keep you relaxed for hours, and the second row can fit in two occupants at ease, but three would be rubbing shoulders. Second-row occupants also do not get a handrest which is expected in a chauffeur-driven car. While there is a single AC vent at the back, it can only be directed to either side. The company has also added two USB sockets to support smartphone charging on the second seat but missed out giving any pocket to actually place the devices.

The e6 is turned on with a tap on the start button and the meter console lights up like a Christmas tree and that's the only hint that the car is turned on. There is no noise from the engine bay since it employs batteries and an electric motor. There is a 71.7 kwh blade battery on the car that has been rated to deliver over 500 km of full charge range. And even after driving the car all day long for about 150-200 km, the battery levels didn't drop much, and the company's expertise in electric battery technology is quite evident in the e6. It is available with DC fast charging support which takes almost 1.5 hours to fully charge the battery.

The e6 simply floats on a wave of torque and the way the power is delivered is quite smooth and linear, so don't expect it to blow you away with the way it drives, as it is not supposed to do that. 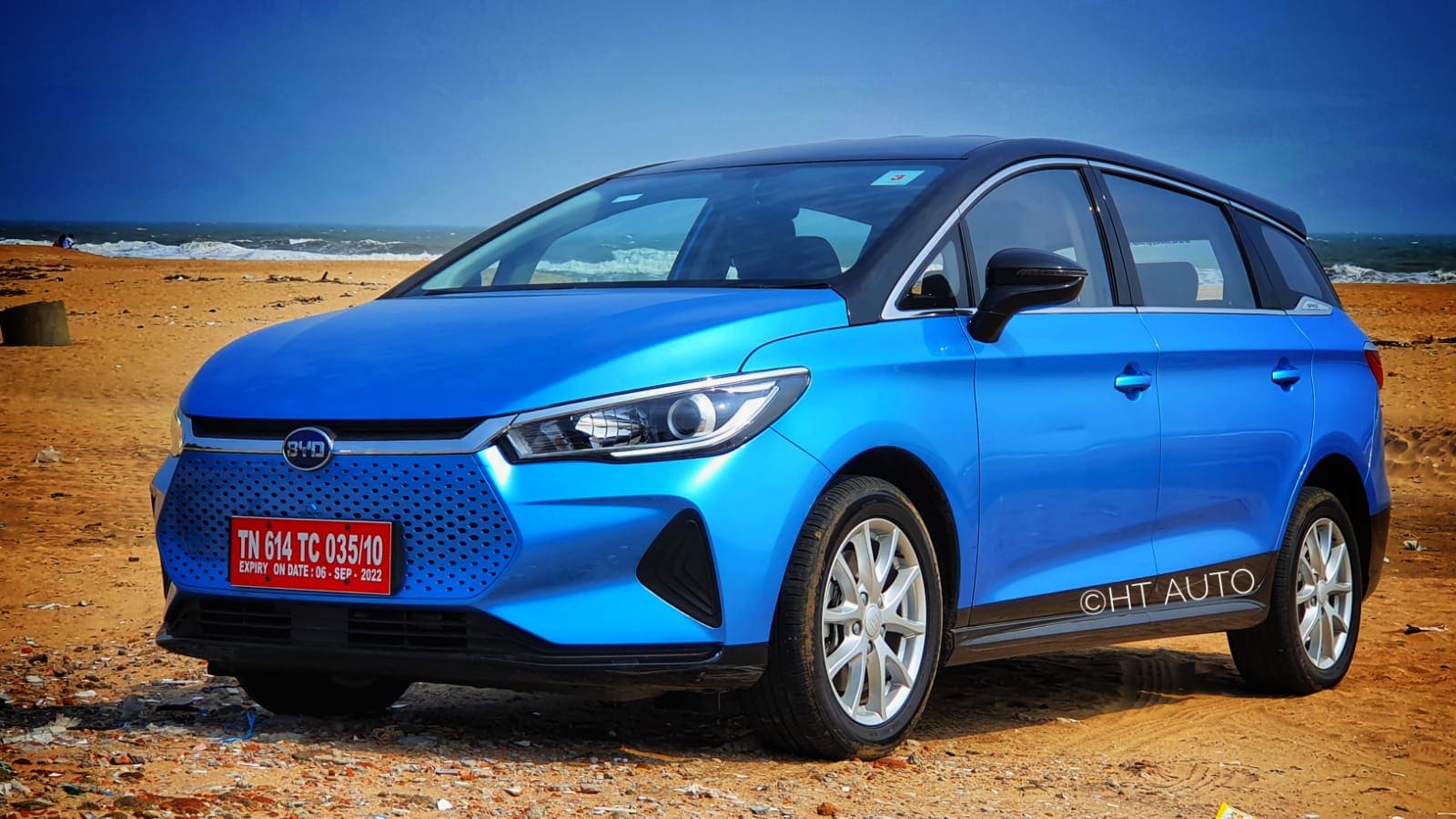 The e6 simply floats on a wave of torque and the way the power is delivered is quite smooth and linear, so don't expect it to blow you away with the way it drives. (HT Auto/Sabyasachi Dasgupta)

As far as the cabin experience in the second row is concerned, the e6 feels quite silent and promises to cocoon its occupants on the inside. The NVH levels are significantly low and the ride quality on the car is also impressive. The suspension on the car has been tuned to soak up all the undulations without any drama, so the company has done a tremendous job keeping the ride of the e6 plush and comfortable.

At nearly about ₹30 lakh, the BYD e6 is demanding a sizable amount but given the fact that it is a CKD, the pricing is bound to remain on the expensive side of the chart. The company has confirmed that they could look into also manufacturing the car locally in the country depending upon the demand for its maiden product, but that's a story for another day.

In short, the e6 comes out as a promising product for fleet buyers that seek to squeeze out the best value from its long-ranged batteries. While it might not have the luxury level you'd expect from an MPV of its cost, BYD isn't charging for that, but for the proven electric technology that underpins the car.