BMW to launch 5 Series Carbon Edition in India tomorrow: What to expect 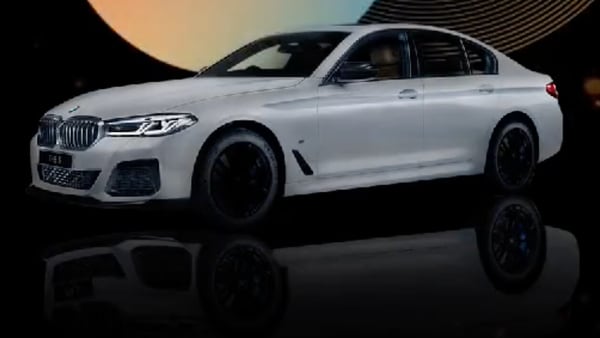 BMW has teased the Carbon Edition of its 5 Series sporty luxury sedan ahead of its India debut on October 21.

About six months after BMW drove in the new 5 Series luxury sedan to India, the German carmaker is looking forward to add a performance version of the car on Thursday. BMW has teased the 5 Series Carbon Edition, which will make its India debut tomorrow.

Expect a host of BMW M Performance enhancements in the Carbon edition of the 5 Series model. In Global markets, the BMW 5 Series Carbon Edition is available in the 530i, 530i xDrive, 540i, and 540i xDrive models. However, the carmaker has not given any details which trims will get the Carbon Edition package in India.

The interior is unlikely to see any major changes. It is likely to retain most of the features seen on a standard 5 Series model, which includes a 12.3-inch fully infotainment system and a similar sized driver display, perforated Sensatec upholstery, BMW Operating System 7.0 with 3D Navigation, and much more.

The 5 Series Carbon Edition is likely to borrow the same 2-litre 4-cylinder petrol engine that is capable of churning out output of 252 hp and 350 Nm of torque. The engine is likely to be mated with BMW's eight-speed Steptronic sport automatic gearbox.

BMW 5 Series standard models currently on offer in India are also offered with two diesel engine options. There is a 2-litre 4-cylinder unit that can produce 190 hp of power and a peak torque of 400 Nm. The second unit is a 3-litre 6-cylinder in-line engine churning out 265 hp and peak torque of 620 Nm.

The sporty business saloon is set for a festive upgrade.

Get ready for the #BMW5Series Carbon Edition.