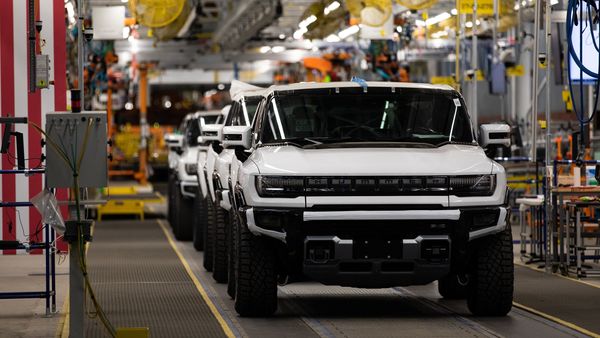 GMC Hummer electric vehicles are one of the most awaited EVs.

Stay on top of the revolutions reshaping the auto world — from EVs to self-driving technology — by signing up for Hyperdrive’s newsletter here.

In August, President Joe Biden invited Detroit automakers to the White House lawn to promote electric vehicles. Tesla wasn’t included. The snub was noticeable, but I get it — Biden is a big union ally; organized labor is absent from Tesla’s U.S. factories; Michigan is a critical swing state that Biden won in 2020 and will need to win again if he seeks reelection.

Then the rhetoric went off the rails.

“In the auto industry, Detroit’s leading the world in electric vehicles," Biden said. “Mary, I can remember talking to you way back in January about the need for America to lead in electric vehicles. I can remember your dramatic announcement that by 2035, GM would be 100% electric. You changed the whole story, Mary. You electrified the entire automobile industry. I’m serious. You led, and it matters."

In reality, the only fully electric models GM has had on the U.S. market lately are the Chevy Bolt hatchback and utility vehicles, both of which have been recalled due to battery fire risk. The company has halted production of those models while it works on replacing defective batteries in cars already sold, and last week confirmed it would keep the plant that makes these models idle for the rest of the year.

Tesla has four EVs on the market, one of which it started delivering to customers almost a decade ago. Through August, Tesla’s Model Y SUV was the best-selling electric model, with 104,555 registered in the U.S., according to IHS Markit. The Model 3 sedan was second, with 79,620. The Bolt was a very distant third at 24,997.

GM had a rightful claim to EV leadership in the late 1990s, but squandered this when it pulled the plug on its pioneering EV1 model. Tesla was founded in 2003 and set out to prove there was consumer interest in fully electric vehicles. In January 2010 — when Barack Obama was president and Biden was vice president — the Energy Department issued a $465 million loan to Tesla as the company was working on the Model S. Tesla paid back the loan early, and in full, in 2013.

Along the way, auto dealership associations and GM fought Tesla’s efforts to sell cars directly to consumers in several states. There’s a long, acrimonious history between the two companies, and anyone who watched the documentary films “Who Killed the Electric Car?" and the sequel “Revenge of the Electric Car" will understand why.

I can’t help but wonder why Biden and Vice President Kamala Harris, who is from Tesla’s home state of California, so studiously avoid any mention of the company, which employs more than 100,000 people worldwide. Does the Biden administration desperately want to distance itself from the world's biggest billionaire?

There is plenty to criticize Musk for, from his crude and juvenile tweets at members of Congress to his refusal to abide by local public-health mandates in the early days of the pandemic. But Biden would do best to stick to the facts and acknowledge — as the market has — Tesla’s role as the leader in the EV revolution.