Hyundai began exporting cars manufactured at its Sriperumbudur plant near Chennai back in 1999.
By : HT Auto Desk
| Written By : Shubhodeep Chakravarty
| Updated on: 30 Jan 2020, 02:50 PM 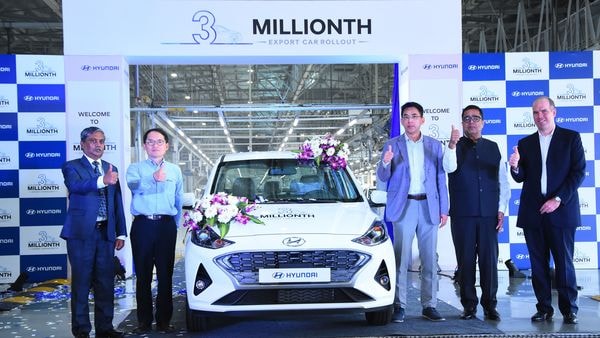 Hyundai Motor India Limited on Thursday announced that it had shipped its 3 millionth car for export from its manufacturing plant in Sriperumbudur near Chennai. The car was the recently-launched Aura compact sedan which has commenced exports from India to 88 countries around the world.

Hyundai has put forth Aura as a premium product offering in the compact sedan segment and it also became the 3 millionth 'Made-in-India' car to be shipped out. This particular Aura - shipped as Grand i10 for the Colombian market - is especially significant because it serves as a major milestone for the company which first began exporting cars from India back in 1999. At the time, 20 Santro cars became part of the first batch which was sent to Nepal.

While Aura is the latest to join the growing product portfolio of the Korean car maker, the company also exports Atos (Santro), Grand i10, Grand i10 Nios, Xcent, Elite i20, i20 Active, Accent (Verna), Venue and Creta from India.

Globally, the company exports to 33 countries in Latin America, 28 in Africa, 24 in Asia Pacific region and one country in Europe.