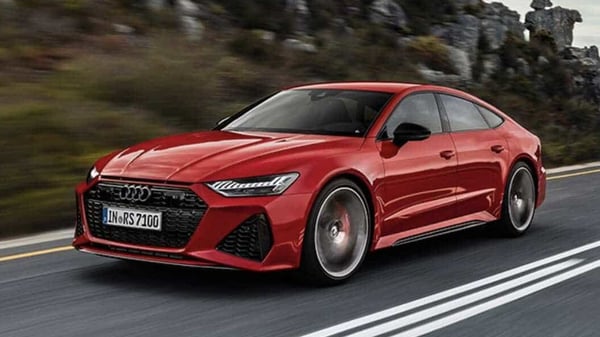 Audi India will introduce the new RS7 Sportback on July 16. The sports car has been teased once again ahead of imminent launch.

The company has already commenced bookings on this premium car and the deliveries are slated to begin in August.

The latest teaser (above) shows the high-performance version of the A7 sprinting from a standstill to 100 kmph in just 3.6 seconds. Under the hood, the new RS7 Sportback comes fitted with a 4.0-litre twin-turbocharged V8 engine which works in conjunction with a 48V mild-hybrid system. This system is rated to produce 591 PS of maximum power and 800 Nm of peak torque. The transmission option includes an eight-speed automatic unit. The engine transmits power to all the four wheels.

The company has earlier described the new RS7 Sportback as “Made for the racetrack. Launching on-road."

The second-generation Audi RS7 Sportback can either be booked online or at an Audi dealership for a token amount of ₹10 lakh.

Prospective customers can also visit the company website to experience the new RS7 Sportback in augmented reality. This feature provides a 360-degree product visualizer where users can check out both the exterior and interior of the car in great detail.

Speaking to HT Auto earlier, Dhillon had hinted at the launch of the sporty vehicle. He said, "We'll have more products not just in space of volume but also in the space of sports vehicles. So, you'll see a lot of RS models coming in and also volumes." (Read full conversation here)