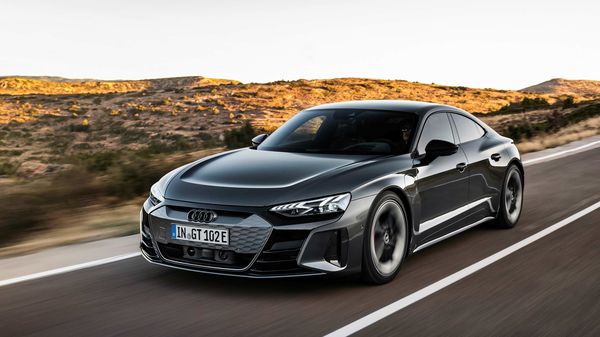 Audi is all set to drive in the 2021 e-Tron GT model to India this week. The German auto giant will launch the electric car, its third in the country after the e-tron and e-tron Sportback. The Audi e-Tron GT is likely to be priced between the range of ₹1.5 crore and ₹2 crore (ex-showroom). The bookings have already started for an amount of ₹10 lakh.

Audi e-Tron GT and its RS version have already been launched in the global markets. The German car manufacturer will be launching the standard version of the e-Tron GT here. It is also likely to launch the RS trim in India soon.

In the latest teaser, released just 48 hours before the launch takes place, Audi showcased some of the design elements of the upcoming e-Tron GT four-door coupe. It showcases the electric car's sloping roofline and broad shoulder line along with the signature LED headlights and tail-lights.

Audi e-Tron GT standard model is equipped with an 85 kWh lithium-ion battery pack and powered by a 475hp electric motor generating 630 Nm of peak torque. It can hit a top speed of 245 kmph and sprint from zero to 100 kmph in just over four seconds.

The RS trim which draws power from a similar-sized battery pack, can produce 598 hp of maximum power and 830 Nm of peak torque. It is slightly faster and more powerful to the standard model with a top speed of 250 kmph and the ability to run from zero to 100 kmph in 3.3 seconds.

The standard e-Tron GT model has a claimed range of 488 kms on single charge, while the more powerful RS version reportedly gets 472 kms out of a single recharge.

Inside, the Audi e-Tron GT will come with a 10.1-inch touchscreen infotainment system, a 12.3-inch digital instrument cluster and shift-by-wire gear technology.

When launched, the GT version of the Audi e-Tron will sit above some of the other luxury electric vehicles like the Mercedes EQC and Jaguar I-Pace. It is likely to take on the upcoming Porsche Taycan electric.