The supercar from the British manufacturer will return for one final generation. It is going to be powered by a 5.2-litre engine that can produce around 700 hp of maximum power.
By : HT Auto Desk
| Updated on: 11 Mar 2022, 05:52 PM 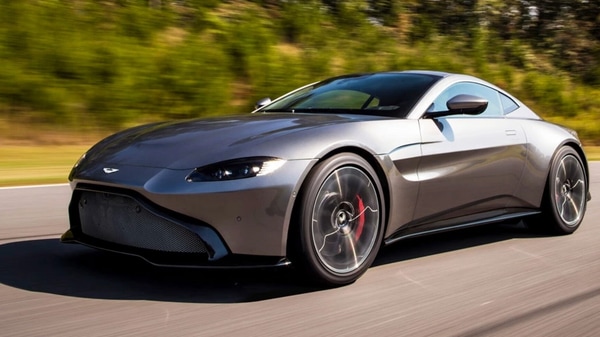 British supercar manufacturer Aston Martin is preparing to launch the 2022 V12 Vantage next week. The carmaker has announced that the global premiere of what will be the last V12-powered Vantage will take place on March 16. The British carmaker has already shared several details about the car and has tested it on the ground almost without camouflage ahead of its global launch. Aston Martin has shared a latest teaser, which allows one to hear the roar of the V12 engine. The carmaker said the ‘V12 Vantage, crafted with unapologetic power and luxury, overtakes the senses through its unmistakable and deafening V12 Aston Martin roar’.

Until now , the current generation of the Vantage was offered exclusively with a V8 engine with 510 horsepower and 685 Newton meters of torque. The V8 will be replaced by the V12 engine, which has a displacement of 5.2-litres. The engine is capable of churning out maximum output of 700 hp and a peak torque of 752 Nm. It allows the Aston Martin V12 Vantage to sprint from standstill to 100 kmph in just over 3.5 seconds. It will also have a top speed of 300 kmph.

To complement this engine, the new Vantage will also come with a wider dual exhaust system. It is likely that the engine has larger dimensions compared to the current V8 used in the tests of this new Aston Martin.

The last V12 Vantage dates back to 2009, which came with 517 horsepower at a time when the V8 options credited 426 horsepower. That model served as the basis for other projects, including a 573-horsepower V12 Vantage S and a Vantage GT12 that scaled up to 600 hp. Five years after the introduction of the current Aston Martin Vantage, it is time to pay one last tribute to the 12-cylinder.