Amitabh Bachchan poses with this Rampyari Ford Prefect, and Twitter is losing it

Amitabh Bachchan shared a picture with a vintage, bright yellow Ford Prefect on Twitter on Sunday.
By : Sabyasachi Dasgupta
| Updated on: 09 Mar 2020, 01:47 PM 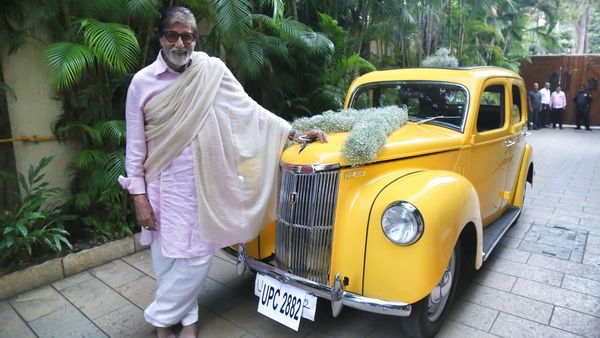 Bollywood star Amitabh Bachchan took to Twitter to share a picture of him posing with a vintage Ford Prefect on Sunday. He was also seen taking the vintage car out for a spin.

The bright yellow colour of the Ford Prefect reminded one of Amitabh Bachchan’s films Akela, where he had a customised Volkswagen Beetle named Rampyari. Ford Prefect was in production between 1938 and 1961 and was sold in United Kingdom, Australia, US, New Zealand, Argentina and Canada.

Incidentally, Amitabh Bachchan’s first car was Ford Prefect. It was a small car which was mostly driven by his mother after his father met with an accident. It was probably the reason the Bollywood star referred to the vintage as ‘a story of times gone by’.

While Amitabh Bachchan stopped short of confirming that the Ford Prefect could be the latest addition to his collection of cars, Twitterati are convinced that Rampyari has returned to its original owner.

Amitabh’s fans loved his new car. “Congratulations on a new car for your collection," wrote one. “Now you will always have the passion for driving this new Car.... . Enjoy Sir.. We are sooo happy to see you with this new car.. Stay always Happy n blessed," wrote another.

The fans' reactions may not be off target totally, because the star owned one such car a long time ago. Also, the car bearing a UPC number plate can be tracked back to Allahabad, Amitabh Bachchan’s hometown, raised speculation whether this is a renovated version of the car owned by the family.

Amitabh Bachchan wrote, “There are times when you are speechless .. I am now .. been trying to express, but nothing comes out ... a story of times gone by .. a gesture beyond time." On his blog, he said he would tell fans more about the car on Monday. He said, “Quite obviously there is a story behind the tale .. and it shall be in narration when the talking stops and the stars listen open, empty handed for across .. a tale of the early 1950′s .. told in the deepest of sleep inducement." 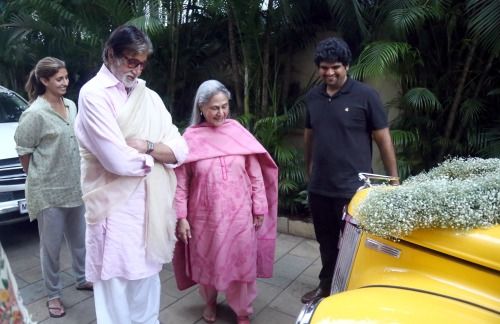 Later on Monday, Amitabh Bachchan confirmed that the bright yellow Ford Prefect is indeed the latest addition to his collection of cars. He shared an emotional story of how one of his friends traced the same model of the Ford Prefect owned by the Bachchans in Allahabad, renovated it and gifted him.

He wrote on his blog, "This is an incredible gesture .. No one has EVER .. EVER .. done anything like this for me .. ! I am so overwhelmed with gratitude and emotion."

Amitabh Bachchan was not only taken aback by the gesture, but also recalled that the number plate UPC 2882 was exactly the registration number on his family car way back in the 1950s.