The livery of the new BMW M Hybrid V8 prototype contains many elements from the brand's five decades of motor racing history in North America.
By : HT Auto Desk
| Updated on: 06 Jun 2022, 04:13 PM 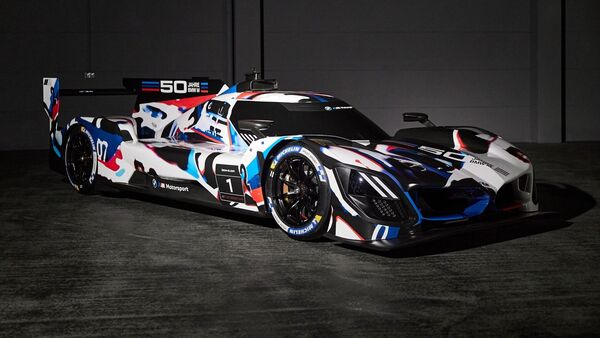 BMW M Motorsport introduced the new BMW M Hybrid V8 on Monday. The BMW M Hybrid V8 racing car is still under a camouflage livery in which the model will complete testing runs. According to BMW, the livery contains many elements from five decades of motor racing history in North America. The cover is a graphic mosaic of pictures of iconic race cars such as the 1976 BMW 3.0 CSL, the 1981 BMW M1/C, the 1978 BMW 320i Turbo, the 1986 BMW GTP, the BMW M3 E36 GTS-2, the BMW Z4 GTLM and the BMW M8 GTE.

The BMW M Hybrid V8 will enter the testing phase soon for the 2023 season in the IMSA WeatherTech SportsCar Championship. Franciscus van Meel, CEO of BMW M GmbH shared about the team's biggest and critical challenge was to make the prototype look like a BMW M Motorsport car. “And I can say this to all the fans, just one look is enough to confirm that the BMW M Hybrid V8 is a BMW. It clearly carries the genes of BMW M. I also love the camouflage livery with its references to the great history of the brand in North America. I can hardly wait to see the BMW M Hybrid V8 on the track soon," added Meel.

Apart from the sleek silhouette and aerodynamic-oriented design, the highlight of the BMW M Hybrid V8 is the wide kidney. Along with these, the prototype also sports other BMW M design elements such as the 50th-anniversary logo on the hood, twin BMW icon lights along with a dynamic body side, Hofmeister kink window graphic, M hook mirrors and the taillights. The premium automaker has not revealed any mechanical and technical specs of the racing car yet.