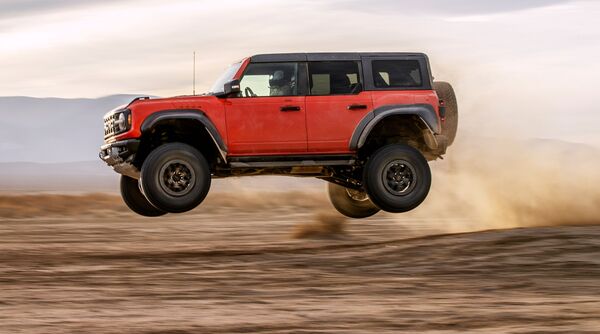 A glance at the image above may seem that of a flying car. However it is the 2022 Ford Bronco Raptor SUV at its off-roading best. The SUV is 9.8 inches wider than the base model and equipped with a stronger steel frame, upgraded axles and 37-inch wheels.

Ford has finally taken the covers off its most powerful street-legal production Bronco ever. The 2022 Ford Bronco Raptor is meant for regular roads, but can take off-roading to the next level with massive modifications compared to the base model to attract extreme adventurists.

Ford Motor says that the 2022 Bronco Raptor is the world’s first Ultra4 Racing-inspired SUV. It has been designed by the Ford Performance, the same team that produces the F-150 Raptor.

Ford Performance tweaked several things to make the Bronco Raptor far more capable as an off-road vehicle than the standard models. At its core is a fully boxed, high-strength steel frame with new shock towers to increase wheel travel and off-road durability. It also gets upgraded axles, additional towing capacity and 37-inch wheels, the largest on any current production SUV. Bronco Raptor also runs with a minimum ground clearance of 13.1 inches, 4.8 inches more than a base four-door model.

Under the hood, the Bronco Raptor draws power from a 3.0-litre twin-turbo V6 engine mated to a 10-speed automatic gearbox. The engine is capable of churning out maximum output of 400 hp. The Ford Bronco Raptor also gets the carmaker's exclusive G.O.A.T. Modes (Goes Over Any Type of Terrain) Terrain Management System. It is aimed to help drivers better navigate off-road. Among seven drive modes on offer, it includes a uniquely tuned Baja Mode that activates a turbo anti-lag calibration to maximise performance over high-speed desert runs.

“Raptor is the apex of our off-road lineup and is now a full lineup with race proven content and design that you can’t get from anyone else," said Jim Farley, chief executive officer, Ford Motor Company. “Only Ford could create a Bronco Raptor."

“We had to build the Bronco Raptor – it’s our ultimate vehicle for hardcore off-road enthusiasts who demand something more," said Carl Widmann, Ford Performance chief engineer. “Like the Ultra4 desert race trucks, the ‘Raptor of SUVs’ conquers desert dunes at highway speeds and is equipped with competition-level off-road technology and hardware."

The Bronco Raptor SUV also comes with features like 12-inch touchscreen, exterior cameras for a 360-degree view, adaptive cruise control as well as a 10-speaker Bang and Olufsen sound system.