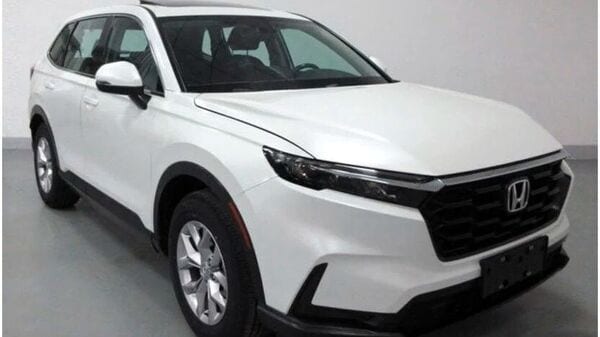 The new-gen Honda CR-V is slated to make world debut later this year.

Honda is developing the new-gen CR-V which is all set to make its global debut later in 2022. While the CR-V has been shelved in India, it continues to drive volumes for Honda in developed markets like North America and China among others. Now the images of the next-generation CR-V have been leaked on the internet which will be a direct replacement for the existing model.

As the images hint, the new 2023 CR-V comes based on Honda's new family design language. If international media reports are to go by, the new CR-V will also come out to be larger than the existing model in terms of body dimensions. It will be 132 mm longer and 13 mm taller, while the width will be reduced by just 1 mm. The overall length, width and height will stand at 4,703 mm, 1,866 mm and 1,680 mm, respectively, while the wheelbase will be extended by 39 mm at 2,701 mm.

The 2023 CR-V will be a whole new model altogether. It will sport a similar-looking black hexagonal radiator grille found on the Honda HR-V. Against the current car, there will be a taller and sharper bumper with a bigger air dam. It will also get new 10-spoke alloy wheels which are radically different than the previous units. At the back, the vertically positioned tail lamps have quite a familiar design.

Inside, expect the new-gen CR-V to feature a whole new cabin altogether. It will also be offered with the option of third-row seating as well.

It is unlikely to be rolled out in India anytime soon. Especially when Honda has already taken down the existing model in the country.