Volkswagen Taigun could well be the biggest launch of the year for the Germans as the car maker is readying its compact SUV for a possible India debut this month.
By : HT Auto Desk
| Written By : Sabyasachi Dasgupta
| Updated on: 09 Aug 2021, 08:48 PM 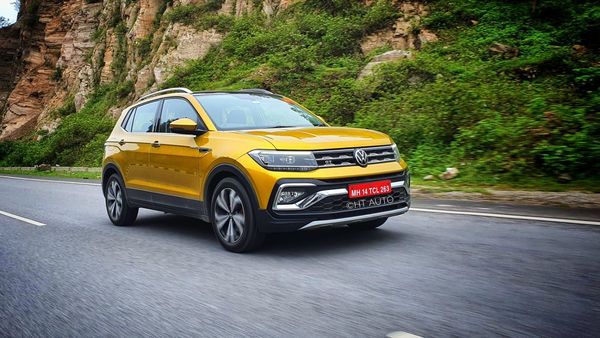 Volkswagen will open the bookings for the 2021 Taigun SUV from August 9 ahead of its launch later this month. (Photo credit: Sabyasachi Dasgupta/HT Auto)

German auto giant Volkswagen has announced the opening of pre-bookings for its upcoming 2021 Taigun SUV. The first compact SUV from Volkswagen for the Indian market is set to launch later this month. The Taigun SUV was unveiled earlier this year in March.

Volkswagen made the announcement of pre-bookings through its social media handles. However, the carmaker has not specified the amount for pre-bookings of the SUV yet.

Volkswagen Taigun SUV is based on the same MQB-A0-IN platform as the Skoda Kushaq, and can be considered as sibling in terms of specifications and features. However, Taigun has a few distinct features to create its own identity, especially in the SUV's exterior design.

The prominent VW slatted grille at the front are flanked by sleek LED head light and LED DRL units. There is generous use of chrome at the front, on the grille as well as the fog lamp casing. At the rear, the 2021 Taigun will feature LED infinity tail lights which runs across the width of the SUV. Besides these, the top-spec variant of the SUV also gets 17-inch dual-tone alloy wheels, door handles with chrome garnish, working roof rails and a blacked out B-pillar.

While the wheelbase of the 2021 Taigun SUV is similar to that of Kushaq at 2,651 mm, it has a higher ground clearance than its sibling from Skoda. Kushaq's ground clearance stands at 188 mm, about 17 mm shorter than its rival from Volkswagen.

2021 Taigun SUV will be packed with features on the inside. The SUV gets dual-tone interiors, a 10.1-inch main infotainment screen and a 10.2-inch digital instrument cluster, support for Android Auto and Apple CarPlay, ambient lighting, ventilated front seats and a panoramic sunroof.

Under the hood, there will be choices of two petrol engines; a 1.0-litre 3-cylinder turbocharged petrol that can produce 113 hp and 175 Nm of torque and a 1.5-litre 4-cylinder turbo petrol engine churning out 148 hp and 250 Nm of torque. Both engines will be mated to three kinds of gearboxes, which include a six-speed manual, a 6-speed torque convertor automatic and a 7-speed DSG automatic gearbox.