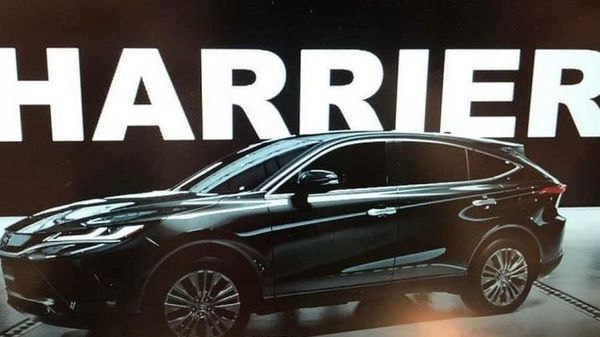 The next-gen Toyota Harrier has appeared online in a promotion video leaked on Instagram. Toyota is about to roll-out this promo video soon in Japan.

For the people unaware of the Toyota Harrier, the company isn't exactly using Tata's trademark, since 'Harrier' is originally a Toyota's mid-size SUV which has been around since late-1997. On the other hand, Tata Harrier was launched in early 2019.

Now, the Toyota Harrier will enter its fourth-generation later this year. This may also spawn out the remodeled Lexus RX in the future.

As the leaked video suggests, the next-gen Toyota Harrier will turn into a much sharper SUV boasting a fluidic design, similar to what the India-bound Ford Mach-E has.

The silhouette reflects that the all-new Harrier features a longer hood, lowered height, and a roofline which drops much more aggressively than before, giving it a cleaner, classier look.

At the front, the SUV features a pointed snout with a chrome bar extending horizontally and a sleeker upper grille flanking slim headlamps which make it look more appealing. Coming down, the lower grille has swollen in size and the bumper, of course has been redesigned to gel with its new appearance.

Over the sides, its fluidic body lines make it much more premium than before. The greenhouse now appears to be sleeker with shortened pillars and lowered roof, all of which contributes to its classier hunkered-down look. Over the rear, it features a Lexus UX inspired full-width tail light stripe.

In terms of mechanicals, the company will launch the 2021 Harrier featuring a 2.0-litre petrol engine. The SUV will also use a 2.5-litre petrol-hybrid engine which will be a second powertrain option.

While the promo video is expected to roll-out in a month from now, the SUV may be officially launched later towards the end of this year in Japan.

For India, there are no chances that it will arrive here anytime soon.